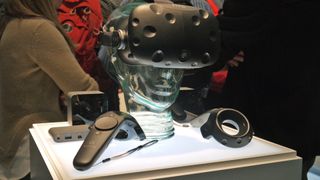 There's nothing as exciting as checking out new technology, and everyone that's used the Vive usually becomes a child in November, feverishly wondering when Christmas will come to deliver the new toy they desperately want.

OK, perhaps that a bit much - this headset will cost $799 at launch, and will need a pretty powerful PC to run - but getting up close with the Vive Consumer Edition feels like a step closer to it becoming a reality.

The new headset is almost identical to the developer option though, with the main changes coming inside the headset.

In the new software you'll be able to sync your phone to get messages, take and receive calls and see other info from your handset in the virtual world - something we've sadly not been able to check out yet.

On the outside, things have been rebooted for comfort: the straps feature more intelligent cutouts to sit on the head with less pressure, and the gaskets have been retooled to let you customise things a bit more to get the right fit.

The outer shell looks pretty similar too - aside from losing the 'Pre' label - so if you're thinking HTC's going to change thing too much before launch because you loathed the way the Pre looked, you're out of luck.

The HTC Vive Pre goes on pre-sale right at the end of February, and it'll be in consumers' hands by April 2016.