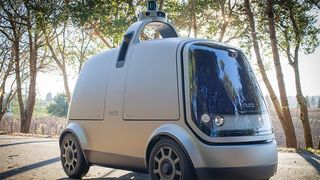 There's a new self-driving car in town, and before you say, "Oh great, another one," know that this vehicle has a distinctly different purpose than most of the autonomous cars we've seen.

The R1, developed by a company called Nuro, is a fully autonomous electric vehicle that ferries around goods, not people. There is no driver, and also no passengers. It's purpose is to deliver goods ranging from online orders to dry cleaning. All you have to do is grab your items from inside the vehicle and watch as it self-drives away.

The R1's cargo capacity is about 20 grocery bags. It's about half the size of a large SUV, making it much bigger than delivery robots that zip around sidewalks with goods stashed inside. And unlike standard services that leave packages at your doorstep, Nuro requires recipients to meet the vehicle at the curb and extract their items from the R1. A smartphone app will let customers track their delivery and gain access to the vehicle.

As you can see in the video above, the R1 can successfully maneuver through typical driving situations, such as stopping as a pedestrian walks across a crosswalk and pulling off a U-turn. This appears to be a closed test course, however, so how Nuro performs in the real world might be a different matter.

While Nuro is joining an increasingly crowded self-driving car space, it's also taking a different route, one that sets it apart from others that are developing autonomous vehicles.

Whereas companies like Waymo and Uber plan to have self-driving cars ferry around people, Nuro's mission is to use its self-driving tech to deliver stuff you've bought. This could see businesses of all sizes utilize its service, cutting down delivery times and reducing the number of gas-powered delivery trucks and vans on the road.

Of note, earlier this year Toyota announced plans for its new e-Palette system and concept vehicle, which will bring retail stores to consumers, rather than the other way around. Toyota's vehicles will offer rides to passengers, however, and we won't see the e-Palette system in service until the 2020 Olympics in Tokyo.

There are, of course, regulatory hurdles for Nuro to overcome before it's up and running, though cities are warming up to self-driving cars, with several already allowing testing on public streets. It was recently announced that Atlanta will welcome Waymo self-driving cars to the city's public roads soon.

Nuro seems to be a key piece to our self-driving future. Amazon and its delivery drones may want to watch out.