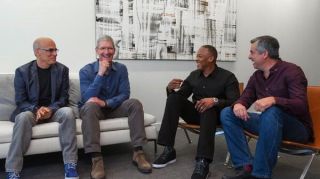 It turns out there was some real truth to last year's rumor that Apple intends to create its own original content.

What comes as a surprise, though, is that the producer/actor/rap mogul starring in and executive producing the upcoming series is none other than Dr. Dre.

Dre's new show, called Vital Signs, is getting the start-up cash from Cupertino in exchange for a six-episode run that is destined to air on Apple Music later this year, according to The Hollywood Reporter.

Sources close to the show claim that it will be semi-autobiographical and co-star Sam Rockwell and Mo McCrae. It's best described as a dark drama that follows Dre as he rolls through emotional highs and lows.

It's unclear whether Apple is using the show to lead the charge on a service similar to Amazon Prime Instant Video and Netflix, or if this is merely a one-off project.

Apple has had original content in its sights now for some time, with executives from Cupertino making the rounds at major Hollywood studios to presumably drum up talent, according to THR. We recently heard word that Apple plans to debut its original programs during the iPhone 7 launch - perhaps Dr. Dre's show will be featured then?

Should it come to fruition, Vital Signs will be the first show to come to any of Apple's services and the first look at the company's future as a production house. Just how well the rapper turned Beats co-founder turned Apple exec transitions to a 30-minute TV show is something we're definitely curious to see.