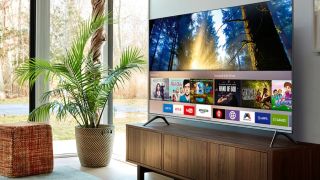 It's a moniker reserved for Samsung's most expensive, highest-spec TVs, but here's the thing about SUHD; it doesn't really mean anything. What's the 'S' for? Nobody knows. The UHD part? Well, OK, that we do know: It stands for Ultra High Definition – it’s basically synonymous for 4K.

So if you see an SUHD label on a Samsung TV, you can be pretty sure that it's got a UHD 4K resolution screen and, because it's a top-of-the-range label, SUHD pretty much guarantees you one of the best Samsung TVs around.

SUHD TVs also include HDR 1000 certification and, at their core, a slice of nanotechnology called a quantum dot display.

SUHD is LCD, but not as you know it.

But before you spend big bucks on a massive SUHD TV, let's delve under the hood of SUHD and tease-out exactly what it is you're buying, and whether it's worth your money.

Is SUHD a new kind of TV?

The way Samsung markets its SUHDs you’d be forgiven for thinking that it was an all-new TV panel technology just out of the labs in Korea.

But it’s not that.

In fact, SUHD TVs are just plain old LCD TVs with a makeover. However, as the rather lengthy name of SUHD TVs – ‘SUHD Quantum Dot Ultra HD Premium HDR 1000 Smart TV’ – might suggest, there’s some significant stuff going on inside.

Put simply, SUHD is package of both high-end tech, advanced features and design.

What is a quantum dot?

Image-wise, this is the nub of SUHD, but it's not unique to Samsung.

Quantum dot is the nano-technology that’s at last making HDR possible for mainstream TVs. Crystals a few nano-metres in size, these tiny semi-conductor particles can be precisely controlled for their colour output.

Traditional LCD backlights push light through between red, green and blue colour filters. In place of those filters, a layer of quantum dots can be precisely turned to give off any colour … hence Samsung’s claim that its SUHD TVs can create over a billion colours.

However, it’s crucial to know that while SUHD is a Samsung-only line-up, both LG and Sony also make quantum dot displays.

Why is it good for HDR?

On SUHD TVs, a quantum dot layer is used to make the traditional backlight on an LCD panel work more precisely. That layer also changes the backlight’s blue colour to a much brighter white, which is another reason why quantum dot displays are so good for HDR.

And while quantum dot is not unique to Samsung, its SUHD TVs do use the company's own proprietary technology. Perhaps the most impressive thing about it is how the HDR-enabling brightness is achieved; they reach 1,000 nits without using the toxic chemical cadmium while preserving energy efficiency, a double-act unique to Samsung.

Since all Samsung SUHD TVs deliver 1,000 nits brightness (hence the HDR 1000 moniker), 0.05 nits black level depths and offer an expanded colour palette that’s over 90% of the DCI-P3 colour spectrum, they are among the very best for anyone interested in HDR (especially at the lower-end of the line-up, such as the 43KS7500 and 49KS7000).

It’s also worth pointing out that Samsung TVs don’t support the other HDR standard, Dolby Vision. If you want to watch films and TV shows in that format you’ll have to look at an LG or Vizio set. (Read up on HDR10 vs Dolby Vision.)

What is Ultra Black?

This has less to do with quantum dots and more to do with Samsung’s use of nano-scaled cones.

Nicknamed ‘moth eyes’ because of the way they let light in, honeycomb structures on a filter reflect light by 20% more, so raising the contrast ratio by about 35% (Samsung’s figures).

That should mean bright and dark parts of images can be viewed without glare.

How SUHD differ from other TVs

While the core image tech may be a tweak of LCD rather than anything revolutionary, SUHD TVs are somewhat different in terms of the package.

As well as all being 4K-ready and capable of showing HDR material, all of Samsung’s SUHD TVs attach to an external One Connect box that houses HDMI slots and other ins and outs, which make the TV slimmer, but mean a table of AV rack is needed.

There are other characteristics that should be considered, too; half of the SUHD line-up is curved, while half is flat.

Is SUHD better than OLED?

Although they're based on ageing LCD panel technology, Samsung claims that its SUHD TVs reach the stunning colour and black levels of LG's OLED TVs when it comes to watching in 4K Ultra HD. Since it doesn't yet make OLED TVs, Samsung would say that, but do they? Can they?

While quantum dot filters increase colour definition and brightness, as LCD TVs, SUHD products do still use an external backlight system to illuminate pixels. The ideal scenario is for each pixel to produce its own individual light – like OLED TVs do. And LG makes some corking OLED TVs, such as the OLED55B6V and G6 Signature OLED.

What Samsung argues is that its SUHD TVs’ use of LCD technology means they will last longer than OLED TVs … probably.

While OLED TVs use organic compounds that will degrade over time, therefore lessening the brightness of the panel, SUHD TVs use LCD panels that are inert, and will therefore give the same brightness in a decade. That’s the logic behind the initially confusing 10-year screen 'burn' warranty for its Quantum Dot TVs.

What are the best Samsung SUHD TVs?

Samsung divides its SUHD line-up into curved and flat models. Here's all the curved models available:

Also in the line-up are a few of flat SUHD TV collections, including: