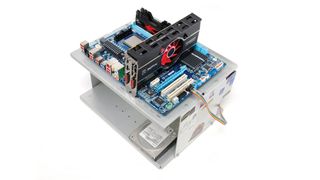 You don't need a cutting edge card for Linux gaming

Linux-based operating systems have long been the alternative OS for us PC users, but there are several reasons why they haven't garnered the mainstream following they perhaps deserve.

Most of the issues stem from the unfamiliar way they work compared with the operating system we've all used a million times before: Windows.

For most of its life it's demanded that its users get elbow deep into command lines - something most of us forgot when Windows 95 happened. It's also had very patchy support for different components, and gaming on a Linux box was generally an exercise in needless frustration.

Things are changing quickly though, and the latest versions of Linux stalwart Ubuntu have been increasingly familiar and functional, and more importantly, easier for the general public to use and get their heads around.

With Windows 8 radically changing the way you interact with your operating system, demanding that you learn these new ways before you can feel comfortable in the new Windows' new surroundings, it's never been a better time to pick up a Linux distribution and learn the ropes on something that's a lot more customisable.

When it comes to gaming though, things are still a little tricky. Gaming through WINE is still rather hit and miss, but the good news is there's a version of steam built specifically for Linux setups that could ensure Linux gaming becomes a viable alternative to the Microsoft-dominated PC scene.

Component compatibility is something the manufacturers will have to become more au fait with though, and we're going to investigate just how well the big players are doing right now.

We've picked some of the most vital parts for penguin-based systems - the processor, graphics card and solid state drives - to see how they fair in the alternative operating system.

We'll see how they get on with the latest manufacturers' drivers and, where we can, with any open source drivers that might be available.

Can you still be a gaming, component-swapping guru running a Linux-based PC? We say hell yes, but you're going to have to be picky with the parts for penguins.