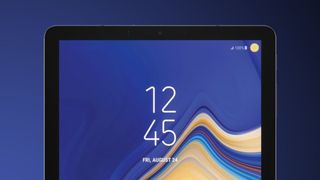 With Samsung Galaxy Tab S4 leaks, rumors and benchmarks ramping up in frequency over the last few weeks, it's expected that Samsung will unveil its Galaxy Tab S3 successor quite promptly.

In fact, its reveal might be even sooner than we think. We now have some very official looking renders of the upcoming tablet showing up on Android Headlines thanks to an anonymous source.

The back, side and front-facing renders show a tablet with relatively small bezels (no Infinity Display here, unfortunately) and no home button or fingerprint scanner, leading us to believe that Samsung has ditched them in favor of its Intelligent Scan face and iris recognition technology (or perhaps the Tab S4 will be the first Samsung device to adopt in-display fingerprint sensor).

Backing up information revealed in the device's supposed US regulatory filing, the renders show a device that's taller and thinner than the Galaxy S3, which also features a single rear-facing camera lens and is powered by AKG audio.

One thing that's surprisingly absent from the renders is a dedicated button for Samsung's controversial virtual assistant, Bixby — strange, given how adamant the South Korean manufacturer has been about including it on all of its flagship handsets, such as the Galaxy Note 8 and Galaxy S9 Plus.

Still, the renders have not been confirmed as official, so there's a chance they may not represent the final product at all — we'll just have to wait for Samsung to finally reveal the Galaxy Tab S4 to see how close they actually are.