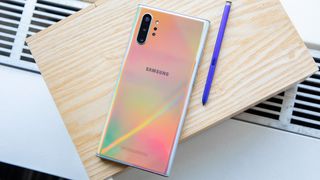 We're expecting the Samsung Galaxy Note 11 release date for the end of 2020, months away as of writing, but with the launch of the Galaxy S20 phones it's the next big device expected from the company.

The Samsung Galaxy S20, as well as the S20 Plus and S20 Ultra, constitute Samsung's first flagship phones of the year, and we'd expect a lot of the tech shown off in them to come in the Galaxy Note 11, or Note 20, phones.

In January 2020 we also saw the Samsung Galaxy Note 10 Lite, a budget version of the Galaxy Note 10 from August that represented the first ever chance to pick up an S Pen stylus phone for cheap. Previously this was a privilege reserved for those willing splash out on a top-end device, but no longer.

So the potential existence of a Galaxy Note 11 Lite means Samsung has the opportunity to create a truly top-end phone, even more so than the leaked specs of the upcoming Galaxy S20 make it seem.

We haven't seen many concrete Samsung Galaxy Note 11 leaks in the news yet – that usually occurs shortly after the flagship Galaxy S phone makes its debut. But we're running with our expectations and have our finger on the update button once the rumor mill kicks into full gear.

We’d also like to see the usual improvements, like better camera, sharper screen, and so on. Those improvements are probably coming no matter what. (We also hope to see a stronger glass back in case we run into more, uh, accidents.) We've got a full list of our hopes and dreams later on.

Latest story: A Samsung patent shows a phone with a super-curved screen, so much so that the side buttons protrude from the display. Could this be the Galaxy Note 20? We're not sure for now but it could be.

Since the 2019 Galaxy Note device was the Note 10, we were expecting the 2020 phone to be the Galaxy Note 11, but that might not actually be the case.

The phones we were expecting to be the Samsung Galaxy S11 devices are actually now set to be the S20 phones, and rumors suggest this change was done so the names of the phone match the years of the release.

If that's the case, the Samsung Galaxy Note 20 could actually be the phone we see in late 2020, not the Note 11. We haven't heard any news, leaks or rumors on the matter, but it gets gradually more likely every day.

It would be pretty odd for Samsung to skip the S11 but keep the Note 11, but for now all the S20 / Note 20 rumors are just that (albeit ones practically confirmed by Samsung). When there's official word on the S20, we'll start referring to the new Note as the Note 20 too.

There's also a rumor that there might not even be a Note 11 - not in name, anyway. Samsung might combine both of its flagship lines into a single phone called the Galaxy One that would essentially be ‘an S-series with an S Pen’ according to reputable leaker Evan Blass.

Patents suggest the Note 11 might pack a spectrometer - a component that analyzes objects to discover its chemical composition. While it wouldn’t be the first phone to pack the device after the Changhong H2, as pointed out by LetsGoDigital, the Note 11 would be a phone with a much wider release.

Of course, some or all of these things could come in the Galaxy S20 first, since the S-series has often debuted new tech which that year’s Note entry inherits. Make sure to check out the Samsung Galaxy S11 page for all the rumors we’ve heard about features coming to that phone, like this one about a 5,000mAh battery and 108MP camera.

We've also heard that the Samsung Galaxy Note 20, as it was called in the leak, could have a 120Hz refresh rate screen that's 'more fine-tuned' – although compared to what, we're not totally sure. Maybe the Galaxy S20?

Either way, this could mean it's less of a drain on battery, or has better automatic refresh rate detection. We're not totally sure yet, and the tweeted message was rather cryptic.

A Samsung patent won just after the Samsung Galaxy 20 launch shows a phone with a display that curves all the way to the rear of the body, but with physical buttons that protrude from the curves of the screen. Could this be the Galaxy Note 20? We're not sure, as it could be a 2021 phone (or never materialize in reality), but we'd hope so.