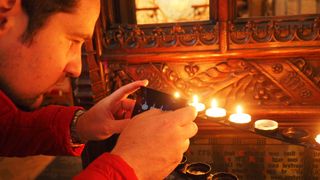 The appeal of smartphone cameras is obvious – why carry around a camera specially when you've already got a phone in your pocket?

What we all want to know, though, is whether a smartphone can really be as good as a regular point and shoot camera, and which smartphone camera is the best of the current crop.

Apple's built a reputation for making one of the best smartphone cameras out there, but it does not have the highest resolution – even the latest iPhone 6S has only 12 million pixels.

The camera in the Sony Xperia Z5, however, is another story. Sony says this is its best smartphone camera yet. We tested the regular Xperia Z5 but it's the same camera in the Compact and Premium models.

The Z5 has a 1/2.3-inch sensor the same size as those in regular compact cameras (much smaller than a DSLR's), and almost twice the iPhone 6S's resolution at 23 megapixels. It also has a hybrid autofocus system covering the whole frame and capable of locking on to your subjects in just 0.3 seconds, with touch-capture control thrown in.

The Z5's 24mm equivalent f/2.0 lens is faster and wider than the iPhone 6S's, the sensor offers sensitivities up to ISO 12,800 and the Z5 uses the same BIONZ processing engine built into Sony's regular digital cameras. It's even scored the highest rating yet on DxOMark for a mobile phone (87).

Megapixels alone tell you very little, however, because high-pixel count, small-sensor cameras can quickly lose any technical resolution advantage to poor lens sharpness and aggressive image processing. And sometimes you discover limitations and restrictions in a camera you just didn't expect.

We've already taken a close look at the iPhone 6S Plus in a head-to-head comparison with the old iPhone 6S. Our conclusion was that, megapixels notwithstanding, the iPhone 6S camera is the equal of any regular point and shoot camera and better than most.

So we've repeated the format of our previous iPhone 6S Plus vs iPhone 6 Plus test, this time pitching the Z5 against the iPhone 6S Plus in a whole series of real-world tests for resolution, noise, lens quality, exposure and color accuracy and video performance.

We're not comparing the Z5 and iPhone 6S Plus as phones, we're comparing them as cameras. We're also looking at this from the perspective of keen photographers wondering if a smartphone camera really can give them the quality they need.