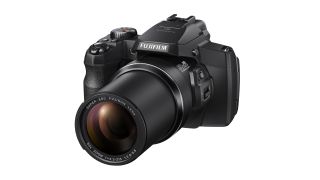 Fuji has announced the world's first weather-resistant bridge camera in the shape of the Finepix S1.

The camera features a 50x optical zoom lens, built-in Wi-Fi and full HD movie recording, all in a dust- and water-resistant body.

The lens of the camera features two aspherical and four ED lenses in a structure of 13 elements in 11 groups, designed for reduced aberration and increased sharpness. Super EBC coating is included to reduce ghosting and flare.

Three further bridge cameras have been announced by Fujifilm. The S9400W and the S9200 both feature 50x optical zooms, along with a new image stabilization system specifically designed for video recording. The S9400W features built-in Wi-Fi.

Finally, the XP70 is a tough camera that features a 16.4 million pixel sensor and is waterproof, shockproof, freeze proof and rustproof, while featuring built-in wireless connectivity.

Prices and release dates vary, but all will be available by February 2014.