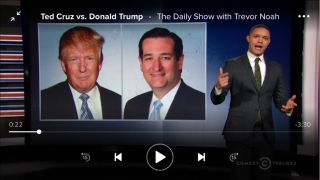 Spotify's new video section has found its way onto iOS as well as on Android, though it might not have meant to have made it to iDevices just yet.

A report earlier this week revealed Spotify would launch the new feature on Android this week with a rollout planned for iOS next week.

But while it may not have launched officially just yet on Apple devices, you can access the new videos section on iOS right now. We were able to access Spotify Video on an iPhone 6, and you can see what it looks like in the image to the left.

Spotify announced it was working on a new video section in May last year, but we didn't really hear much else on the feature until a few days ago.

With the launch on Android, all you need to do is go on over to Browse to find the new video section. On iOS, you'll need to head over to Your Library first.

Under Playlists, you'll find a listing for "Shows" where you can search through and browse for video.

The videos come from Comedy Central, the BBC, VICE Media, ESPN, MTV and a list of others.

A proper section for the new videos will likely be made available on iOS devices next week instead of having to go through a bit of a rabbit hole to find them, but at least for now, nothing seems broken.