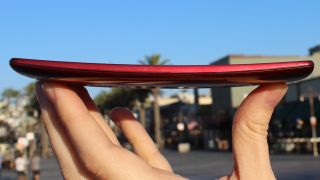 LG's been leading the charge towards bendy, flexible phones of late - but it appears it might be changing direction in order to better compete with its South Korean arch-rival.

According to consta-leaker Evan Blass on Twitter, "LG's also got a handset with curved display in the works - but this one wraps over the top of the device."

What this sounds like is that the screen will roll around the top - which could either mean an alternative to the side curves of the Samsung Galaxy S6 Edge, or one that goes all the way over the top to create a whole new screen.

Either way it will be a significant departure from last year's LG G Flex 2 if it comes to pass, as that phone had a slight flex in the screen and chassis.

Unlike the more famous Samsung Galaxy S6 Edge, which curves the left and right of the screen at the sides, LG's G Flex 2 curves in the in the centre of the device so that the whole phone is a very gentle crescent shape.

PhoneArena earlier reported that we aren't expecting a new G Flex next year - suggesting that this new leak could be LG's new curved display form-factor.

It's unlikely LG will confirm or deny anything this side of Christmas now (the company wants you to buy its current phones, after all), but here's hoping we learn more at CES 2016 in January.