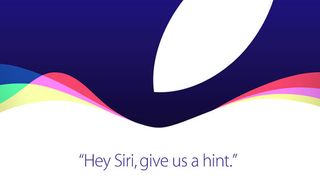 Mark your calendars, everyone, it's finally official: Apple's next iPhone launch event is happening September 9.

Invites were sent out to media outlets this morning confirming the date, along with the cheeky caption, "Hey, Siri, give us a hint." (Spoiler: she won't).

While Apple doesn't actually give us much of a hint, we do expect to see the iPhone 6S and iPhone 6S Plus unveiled, although there are also rumors of an iPhone 6C debuting as well.

The actual launch event will be larger than usual, with San Francisco's Bill Graham Civic Auditorium, which can hold up to 7,000 people, named as the location instead of the smaller Flint Center in Cupertino, where Apple's media event was held last year.

Siri, what will Apple launch?

While the final build of iOS 9 is set to launch with the iPhone 6S and iPhone 6S Plus, we're also expecting to see the new Force Touch tech find its way onto Apple's phones.

We also anticipate the handsets getting a camera boost, more storage, a stronger build and better battery life, but we'll have to wait two more weeks before we get all the details from Apple.

Aside from the two handsets, Apple may also give us a look at Apple Watch OS 2, OS X El Capitan and perhaps even the new iPad Pro and Apple TV 2.

With our invite in hand, we'll be on the ground on launch day, ready for whatever Apple throws at us.