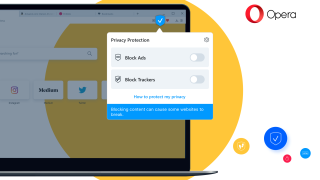 Opera 64 is out now, and can now block all third-party tracking cookies automatically to prevent advertisers following you around the web.

This isn't just good news from a privacy perspective, as it stops companies building up a unique and extremely detailed profile based on your online activity, Opera's developers say it also makes a huge difference to performance, boosting browsing speeds by almost 20%.

You'll find the tracker blocking option in Opera's general settings, and in its Easy Setup menu. A shield icon in the address bar will appear when the option is activated, which you can click to see how many cookies have been blocked, and to toggle the feature off and on for the current site.

It's a feature that'll be welcomed by privacy advocates, and sits neatly alongside Opera's existing built-in ad-blocker and free VPN service.

Opera isn't the first browser to put the brakes on unwanted third-party cookies. Mozilla introduced the option to block them by default when it released Firefox 63 in October 2018, and made it the default setting when Firefox 69 launched in September 2019.

We've also seen an experimental Chrome feature that will let users block third-party cookies with a single click, though this is unlikely to become the default any time soon as Google wrestles with the problem of protecting users' privacy while also maintaining its thriving ad business.

Google has suggested that blocking all third-party tracking cookies means advertisers may be inclined to resort to more nefarious ways of identifying web users (such as fingerprinting), and has proposed a new model for online advertising using a 'privacy sandbox' that would allow a degree of anonymity.

However, this idea would require a complete rethink of online advertising as we know it. For the time being, offering the option of block trackers is one of the best ways to give users control over their data.