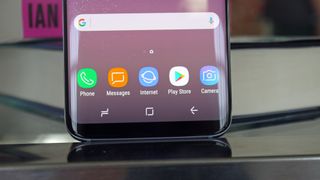 If you own the best phone in the world right now – the Samsung Galaxy S8 – you may have noticed the home button on the phone moves around.

It's a tiny amount, but the button moves around the OLED screen to a slightly different position each time you use the phone.

Samsung fan blog Galaxy Club confirmed the button moves around by putting tape on the screen and testing out the Samsung Galaxy S8.

The reason Samsung has made the button move is to ensure the home button logo doesn't burn-in to the screen by being in the same place. OLED screens can suffer from burn-in if you repeat the same image time and time again.

Your homescreen wallpaper or apps won't burn-in though as the Galaxy S8 screen turns off and makes them disappear, while the home button logo will stay there even when the screen is off.

By making it move around a tiny amount each time you turn the display on, Samsung has managed to avoid the problem altogether.