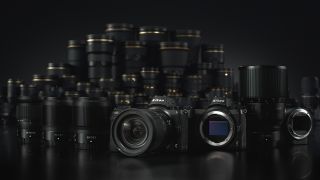 Details of a patent that shows something looking very much like an entry-level Nikon Z-series camera emerged a few days ago – and the internet responded with the expected glee and rubbing of palms.

The idea of an affordable mirrorless camera that bears the same kind of tech that's inside the Z6 and Z7 models – still the only two cameras in the line – would please many existing Nikon APS-C DSLR users waiting for the right camera to move to, not to mention many others.

Yet, with no official launch, no teaser campaign, no model spotted in the wild and no word from Nikon about what it's up to, we don't know much for certain right now. Still, it's precisely this kind of camera that would bolster the Z system and broaden its appeal towards a wider audience – a necessity if the Z system is to flourish.

The fact that Nikon launched its Z series with the Z6 and Z7 makes introducing models on either side of these easy to fit within a single-digit naming convention.

That’s not to say the company will only ever limit itself to five more junior models than the two we currently have, of course, but a Nikon Z1, Nikon Z3 or Nikon Z5 – all of which have been rumored at some point – would make the hierarchy easy to understand.

Nikon did previously make it clear was that it would be concentrating on high-end mirrorless and DSLR cameras, rather than the more affordable end of the market.

The fact that many others have also moved away from the affordable end shows how little interest there is in developing too broad a range of products for such a sector. But Nikon's words don't quite rule out a more affordable option to ease entry into the system – and right now, unlike Canon, Sony, Panasonic and others, Nikon doesn’t have any junior-level mirrorless offerings below its newer full-frame cameras.

This is, however, more to do with timing than strategy, with Nikon having ditched its 1-series line, whose models were all priced well below the Z6 and Z7, last year.

Sony has the upper hand here, not so much because of its breadth of offerings, but because they're all part of the same system, making upgrading far easier for users.

If you're on a budget, the A5100, A6000 and A6300 are all vying for your attention. And if you feel the need to move to a full-frame body in the line, you can still use your lenses, albeit with a crop factor and a lower-resolution output.

The cheapest entry point into Nikon’s mirrorless line, however, remains the Z6 (pictured top), which may be at the more affordable end of the full-frame scale, but is still priced well into four-figure territory. That's fine if you're the kind of user that would have previously opted for a Nikon D750, but it's still a barrier to entry for everyone else.

So, the idea of a cheaper alternative to the Z6 would interest many, be they existing Nikon DSLR users looking to make the switch, or those new to Nikon who haven't been swayed by one of its competitors – and there's plenty that could be culled from the Z6 to craft a more affordable proposition.

The patent's images already suggest that the viewfinder will be dropped, which is the most obvious bit of hardware to omit from a more junior model, as rivals have shown.

Dropping 4K video recording, and using an APS-C sensor instead of a full-frame one, would be the other most likely changes between a new model and the two that exist, although the images within this patent appear to suggest that such a model would retain a tilting LCD screen – not having one would certainly be an odd omission on all but the very cheapest mirrorless camera.

Such a model would be less likely to use XQD memory cards too, as its feature set and target audience would place lesser demands on the memory card used. These cards are still expensive next to SD-type media, and many affordable SDHC and SDXC memory cards are fast and capacious enough to handle the demands of the average mirrorless model.

It’s worth bearing in mind that patents are filed all the time by manufacturers for products that never end up materializing, which could be for various reasons.

An idea may seem workable at first, but may not quite work out in practice when a prototype is designed, for example, or perhaps it ends up being too costly to manufacture.

It’s worth remembering the purpose of a patent – to protect some kind of new technology or innovation from competitors – rather than seeing it as a sure-fire sign of what’s coming.

But with DSLR sales containing to fall, and mirrorless models gaining even more ground, it seems to make no sense that Nikon – or Canon, for that matter – will maintain both systems in the long term, despite any pledges to do so for the time being.

In short, whether of not these images show a future Nikon mirrorless camera, the chances of the company having the Z6 as the line's most junior member for much longer are slim.

This piece previously appeared as 'Nikon Z3: why it makes perfect sense'