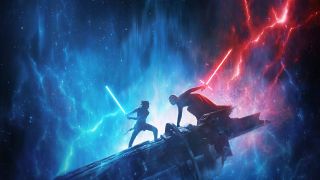 The Disney D23 Expo has become a font of information for breaking Disney news, and this year’s event - which took place over the weekend - was no different.

In fact, D23 2019 might’ve been one of the biggest ever in the company’s history as it brought us new trailers for Star Wars Episode 9: The Rise of Skywalker, The Mandalorian and tons of Marvel shows, plus new details on Disney Plus, the company’s streaming service that launches on November 12.

The star of Disney’s D23 Expo was most definitely Disney Plus. The House of Mouse announced that attendees would be among the first to be able to subscribe to the service at a discount (if they didn’t mind signing a three-year agreement) before giving us some details on the quality and quantity of the streams at a special panel. We know now that the service will support up to four simultaneous streams in 4K / Dolby Vision at the base monthly package price of $6.99.

In terms of timing, we learned that Disney Plus will release new episodes of its shows weekly rather than in one season chunks like Netflix, which could give the service time to catch up with competitors who already have massive catalogues (cough, Netflix) and keep users coming back for more.

In some less good news, Disney reiterated that the service will be available in the US, Canada, The Netherlands and Australia on November 12, but still didn’t mention a UK release date - sorry folks.

That said, you can’t talk about Disney Plus without talking about its flagship Star Wars title, The Mandalorian, which got its first trailer during this year’s D23 event.

The series will be set after the fall of the Empire post-Return of the Jedi (aka Episode 6) and stars a lone bounty hunter donning traditional Mandalorian armor, looking like a color-swapped Boba Fett. The series was created by director/producer Jon Favreau (director of Iron Man and Chef), which bodes well for an interconnected Star Wars TV universe, and stars Pedro Pascal (Oberyn Martel from Game of Thrones and Javier Peña on Narcos).

The Mandalorian wasn’t the only piece of Star Wars content that came out over the weekend - we also got a new trailer for Star Wars Episode 9: The Rise of Skywalker that’s set to debut in December.

You can see the full trailer down below, but in it we see a quick recap of the Skywalker storyline throughout the last eight episodes that concludes with Rey battling Kylo Renon atop the remains of the Death Star II that was destroyed in Episode 6. It’s a scene that hearkens back to the battle between Anakin Skywalker and Obi-Wan in Episode 3, and it’s going to be awesome.

Speaking of old Ben, actor Ewan McGregor confirmed that he will reprise his role in an untitled Star Wars series that will debut on Disney Plus with filming set to begin next year.

The end of the last Avengers film might have wrapped everything up in a nice little bow, but don’t worry, Disney Plus will unravel everything with a slate of new shows that will introduce new villains - and heroes - to the Marvel cinematic universe.

Among these shows are The Falcon and The Winter Soldier which will debut in 2020 and star Anthony Mackie and Sebastian Stan, respectively, as well as WandaVision, Loki and What If…, which will all make their debut in 2021.

Disney also announced new series for She-Hulk, Moon Knight and Ms. Marvel, which will debut on the service at some point in the future.

While Disney’s slate of serialized content is growing in scale, it hasn’t forgotten about its movie-going fans. To that end, Disney divulged new details about Black Panther 2 (that’s now set to release on May 6, 2022) and a new film called The Eternals at D23.

The President of Marvel Studios Kevin Feige revealed concept art images of each character, before announcing three additional cast members: Sersi, to be played by Gemma Chan; aloof loner Druig, to be played by Barry Keoghan; and non-Eternal Dane Whitman, who’ll be played by the King in the North, Kit Harington.