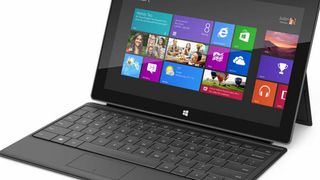 To be or not to be working with RT. That is the compatible question.

The Microsoft Surface tablet was design with productivity in mind, but its users aren't going to get very far if they don't have a Windows RT hardware compatibility list.

Luckily, Microsoft released an easy-to-sort Compatibility Center website, detailing the devices that will work with the pre-installed operating system.

There's a list of eight "popular products" on the homepage as well as a the ability to search for specific hardware beyond those eight.

Tucked away in the masthead are categories of devices, including cameras, printers and scanners, and even graphics cards.

Surface owners who opted for the 32GB model over the 64GB version will want to pay attention to the all-important "storage devices" category when expanding with an external hard drive.

What's compatible with WIndows RT and what's not?

Microsoft lists a total 30,779 pieces of hardware as "compatible" on its website, from its own Xbox 360 controller to Apple's keyboard, mouse and trackpad.

By contrast, there are 12,895 devices that won't work with Windows RT.

That number is deceiving, though. No one expected - or even wanted - internal PC hard drives, for example, to be compatible with the Surface tablet.

Surprisingly, Microsoft's entire line of the USB LifeCam HD webcams the company has been pushing for years is incompatible. Surface owners will have to make due with the tablet's two internal 720p cameras instead.

If a device is compatible, Microsoft gives it a green check mark. If it's not, there's a red X next to a picture of the product.

Also, many keyboards come with warning messages like "Device may have limited functionality," just in case one or two buttons won't work with Windows RT.

Finally, Microsoft also opened up the compatibility list to the community, encouraging community ratings just in case it got things wrong or lists "No Info Yet" next to the product.