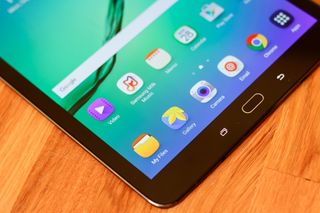 All eyes have been on the Galaxy S7 and Galaxy S7 Edge in the run up to Mobile World Congress this year but it looks like Samsung may have something else in its arsenal – a new tablet.

Leaked benchmarking results suggest the Galaxy Tab S3 is nearing completion and will soon be ready for release.

A tablet called the SM-T819 has been spotted in GFXBench, and even though we can't be certain it's the Tab S3 it would make sense after the Tab S2 had the codename of SM-T810.

There is also a listing for the SM-T719 that is likely the 8-inch version of the tablet, as the smaller version of the Galaxy Tab S2 was called the SM-710.

If this is the Tab S3, it's another sign that Samsung simply doesn't care as much about its Android tablet line up in the war with the iPad.

The larger Galaxy Tab S3 is the only listing with specs at the moment and it suggests it'll have the same 9.7-inch 2048x1536 display as the tablet Samsung released last year.

What's disappointing is the Galaxy Tab S3 will come with a Qualcomm Snapdragon 652 processor. Not much is known about the mid-range processor, but it seems it may be an improvement on the Exynos chipset that was used in the Tab S2.

But that power is a world away from the powerful chips Apple and Sony are thrusting into their top-end tablets, so if these specs are real, Samsung is obviously not pushing its tablet range as hard as in previous years.

There will also be 3GB of RAM, an 8MP rear camera and a 2MP front facing shooter – all the same as the Galaxy Tab S2, so we'll be surprised if these slates get too much attention.

The key question is when the new tablets will launch - MWC 2016 is a possibility, but Samsung usually shies away from rebooting phones and tablets at the same time. It's more likely it'll launch the new tablets at a standalone event following Barcelona (as it did with the first Tab S) or just quietly slip them out in a press release given the spec list isn't as impressive as it could be.

If the Tab S3 does appear in Barcelona this year, then don't expect it to steal any thunder from the new phones - this will still be the Galaxy S7 show for Samsung as it needs its flagship lines to be well-received.