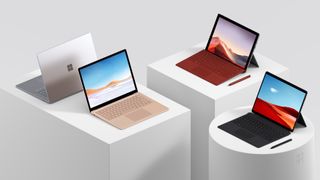 At Microsoft's October 2019 Event, the company unveiled a large range of new Surface devices. A lot of its new devices were leaked before the official reveal, and as expected, Microsoft launched a whole suite of Microsoft Surface devices, spearheaded by the Surface Laptop 3 and Surface Pro 7.

Microsoft also had some surprises in store as well, such as the Surface Neo – a dual-screen device that could prove to be revolutionary. And, the Microsoft Surface Duo, which is finally another Microsoft-made phone.

Many of these devices will be on store shelves by this holiday season, but Microsoft also unveiled some more esoteric projects that will take some time to make it to market. It's only unfortunate that we didn't see the Surface Book 3, which we were eagerly awaiting for.

We went ahead and gathered all of it up right here in one place.

The first thing that showed up is the Surface Laptop 3, the latest generation of Microsoft's massively popular Surface Laptop. This traditional form-factor PC now comes in both 13-inch and 15-inch sizes, and packs the latest hardware from both Intel and AMD.

Now, the 13-inch Surface Laptop 3 comes with the latest 10th-generation quad-core processors from Intel, just as we'd expect it to. However, the 15-inch model comes with a custom AMD Ryzen 7 processor, or as Microsoft called it "Ryzen 7 Surface Edition". This CPU is paired with AMD Vega graphics to apparently deliver the fastest graphics performance in its weight class.

But, what might be more important to some people is the changes to the chassis. USB-C is finally on the Surface Laptop 3, even if the proprietary Surface Connect port is still there. You're also getting a larger trackpad - 20% larger to be exact. And, with a new aluminum finish, the Surface Laptop 3 is absolutely beautiful.

The best part, though? The top of the laptop is removable, so the laptop can be serviced. Microsoft did make it pretty clear that this is only to be done by professionals, however.

And, of course, we're getting a new Surface Pro. The Surface Pro 7 wasn't graced with as many details as the Surface Laptop 3, but we do know that USB-C is finally here. However, it's still using that annoying Surface Connect port.

That's about all we know right now as far as what the Surface Pro 7 can do, but we expect we'll know the hardware underneath the pretty exterior very soon, and we'll update this article as soon as we know more.

Until then, you can preorder the Surface Pro 7 today, and it will hit store shelves on October 22. It will start at $749 / AU$1,249, but we expect higher-specced models will be much more expensive.

It seems like every tech company is coming out with smart earbuds right now, and apparently Microsoft wants in on the action. Enter the Surface Earbuds.

These true wireless earbuds pack what Microsoft calls "Omnisonic sound" and come packed with a charging case. And, unlike Windows 10's weird issues with Bluetooth, these Surface Buds will have One-Click pairing to the desktop.

Because it's a Microsoft device, it features some unique features like Office 365 integration, and will translate PowerPoint presentations in over 60 languages. You don't even have to worry about it running out of battery, either, as it has 24 hours of battery life.

Even if you don't have a Windows 10 machine, you can use the Surface Earbuds, as they're compatible with Android, where you can use touch controls to launch certain music apps.

The Surface Earbuds will be available this holiday season, starting at $249 - just in time for the Black Friday deals and shopping rush.

Now for something completely different: the Surface Pro X. This is one of the thinnest products in Microsoft's lineup, measuring just 5.3mm, making for an extremely portable device.

And that portability isn't just for portability's sake. This is a device designed to be your constant companion, thanks to the new MSFT SQ1 processor that powers the Surface Pro X. This is a Snapdragon processor on the ARM platform, like the rumors were suggesting, which means that this thing has LTE connectivity and just 7W of power draw. We don't know what the battery life is going to look like, but with power draw that low, it should be impressive.

Don't get it twisted, though: this thing is still easy on the eyes. It has the signature Microsoft Surface design and an edge-to-edge PixelSense display that comes in at a jaw-dropping 2,880 x 1,920 resolution. And, with a 1,400:1 contrast ratio, you'll never want to take your eyes away.

Luckily, the Surface Pro X has Full Windows 10 support, rather than being stuck with Windows 10 S like a lot of other ARM-based Windows devices. That means not only will you be free to carry this around unfettered by WiFi connections, but you won't be locked down by the operating system, either.

Microsoft also revealed a new Surface Slim Pen, which should be a much better companion for a device like the Surface Pro X. You can dock the Pen just beneath the display on the new Type Cover, and when it's there it will constantly recharge, so you don't have to fret about how much battery your Surface Pen has.

And, about that new Surface Pen: the new Surface Pro X has 4,096 levels of pressure sensitivity, which should be excellent news for any artists on the go. Adobe even came on stage to show off what it can do, unveiling the new Adobe Fresco app, a new program for painting and drawing. This app attempts to recreate what it feels like to paint with specific brushes and pencils. We're not much of artists ourselves, but it seems like this is the perfect medium between visceral, physical art and the digital realm.

One more thing. Microsoft unveiled the Surface Neo, but don't think you'll be able to get your hands on it any time soon. This device won't be available until Holiday 2020, but Microsoft wanted to tease it now. Through this device, Microsoft aims to "remove the conflict between a laptop and a tablet". Microsoft believes that this is a "new product" that will be "the next category".

This is a dual-screen device, based on Intel technology. It will be able to stretch images between both displays, and it's just 5.6mm thin on both sides. And, weighing just 655 grams, protected by Gorilla Glass, and packed with a magnetically attached pen, this is going to be a dream for any artists on the go.

If you need a keyboard to get your work done, there's one of those on the Neo, too. It's magnetically attached to the back of the device, and when you swing it around front to use, the top half of the display will change to the Wonder Bar. This second display is reminiscent of the Asus ZenBook Pro duo, and will let you bring up a ton of tools to help you with your work.

The Microsoft Surface Neo will be powered by Windows 10 X, a new version of Windows 10, that's optimized for dual-screen devices. Microsoft is hoping that Windows 10 X will fuel a new era of productivity and creativity. And, you don't have to worry about the app you rely on not working, as Windows 10 X will support all Windows 10 apps - it won't be restricted like Windows 10 S.

As far as what's under the hood, Microsoft was understandably a little vague. All we know is that it will be packing a custom Intel Lakefield processor. This processor will be packed with Intel Gen11 graphics, and because Intel was able to cut the silicon footprint in half, the PCB is half the size, which is likely a large part of why the device is so small.

Now, with this device being so far out, and so innovative, we don't know what it will cost, but don't expect it to be cheap. We expect Microsoft to reveal pricing closer to the Holiday 2020 release date.

Microsoft finally unveiled its phone, or a communications device. Whatever it is, Microsoft says "Make no mistake: this product is a Surface": meet the Microsoft Surface Duo.

This is a dual-display phone, rather than the foldable display like what the Samsung Galaxy Fold offers. You'll get dual 5.6-inch displays on both sides of the device, which is a lot of screen.

And, for those who survived the Windows Phone days, you'll be happy to know that Microsoft has partnered with Google to bring Android support to the Microsoft Surface Duo. This device will support every single Android app out there.

If you want to get your hands on the Microsoft Surface Duo, you'll have to wait until Holiday 2020.