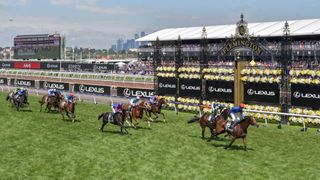 Attracting runners, trainers,owners and punters from all around the world each year, the Melbourne Cup, is regularly referred to as the race that stops the nation. To reinforce that point, Australia's most famous horse race is a sporting event so big that the entire state of Victoria gets a public holiday!

The great news for racing fans is that all the action will be aired for free in Australia. That means everyone has the chance to watch it anywhere in the world, thanks to the wonder that is a VPN. Read on to find out how to get a Melbourne Cup live stream from anywhere on Earth.

The 159th Melbourne Cup will be run on Tuesday, November 5 this year at the Flemington Racecourse in Melbourne, Australia.

The main event begins at 3pm AEDT local time, so that means it's on in the early hours of Tuesday morning in the UK at 4am GMT and 11pm ET or 8pm PT in the US on Monday night.

The two-mile race was last year won by Cross Counter, who will be back to defend his title, however a 6.5kg gain in weight means it'll be tough for him to repeat the feat this time out.

Local hopes are resting on the Danny O'Brien trained Vow and Declare, following a strong win at the Tattersalls Cup, along with impressive runs at the Turnball Stakes and the Caulfield Cup earlier in the season.

Also being heavily backed is northern hemisphere 3-year-old Constantinople, following a good run in the recent Great Voltigeur Stakes at York, although his inexperience is likely to count against him here, while the winner of the Caulfield Cup Mer De Glace is being installed by a number of bookies as the outright favourite.

This year the race will be aired live, locally, by Australia's Channel 10 for free. Read on to find out how you can catch all the action no matter where you are in the world – yup, even if you're an Aussie on your hols.

Get a FREE 2019 Melbourne Cup live stream in Australia

If you happen to be in Australia, you're in luck – all the action of the Melbourne Cup is aired for free on Channel Ten, who have this year snatched the live broadcast rights from Channel 7.

That means you can enjoy it directly via desktop or mobile with Ten's online platform – Tenplay .

Live coverage will also be on offer from racing.com on free to air TV as well as Foxtel channel 529. Foxtel will also have live coverage on Sky Racing 1 which is channel 526.

Additionally, racing fans can also live stream the race via the Kayo Sports streaming service, which features no lock-in contracts and also includes access to over 50 sports, both live and on demand. Kayo Sports Basic Package costs $25 per month and allows users to stream across two devices simultaneously. Alternatively, the service also offers a Kayo Sports Premium Package, which provides three concurrent streams for $35 per month.

If you're out of the country you can still catch all the action using a VPN. These are easier to use than you might think and let you get around the broadcaster's geo-blocking.

How to get a Melbourne Cup live stream from anywhere

If your access to watch the 2019 Melbourne Cup is indeed blocked (and it's not being broadcast where you are) a Virtual Private Network will help. We've tested all of the major VPN services and we rate ExpressVPN as the absolute best. It's compatible with a whole host of devices (e.g. Amazon Fire TV Stick, Apple TV, Xbox and PlayStation), and ranks amongst the fastest and most secure. The 24/7 support is excellent as well, meaning it's hard to go wrong with Express.

It heads our pick of the world's best VPN providers and comes with a 30-day money back guarantee to make sure that you're happy with it. That said, sign up for ExpressVPN for a year and you'll get an extra 3 months FREE!

How to watch the Melbourne Cup 2019: US live stream

At present ther's no confirmed broadcaster in the US showing the race live unfortunately.  If that changes, we'll be sure to let you know.

The only alternative is to use one of our best VPNs as described above, set your location to a country on this page that is broadcasting and go from there.

How stream Melbourne Cup 2019 live in the UK

If you're in the UK and fancy a flutter on this huge Aussie race, then you can watch all the action from the Melbourne Cup via the new Sky Sports Racing channel which is available to all Sky TV or Virgin Media customers on a basic subscription.

If you don't have Sky or Virgin and just want to watch racing, you can still subscribe to the At The Races Player instead. It costs £9.99 per month, and let's you access racing action from around the world on your phone and tablet via its apps.

Which ever method you use to watch the race, be prepared for a late night - this year's Melbourne Cup is set to start at 4am GMT in the early hours of Tuesday morning.