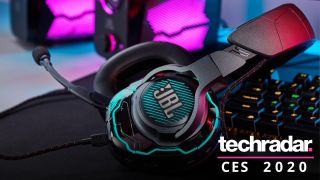 JBL has unveiled its new series of CLUB headphones at CES 2020, as well as a host of gaming headsets. Three sets of headphones make up the CLUB series: the CLUB ONE, CLUB 950NC and CLUB 700BT, and it's touted as a pro-inspired product line designed for everyday personal use. Each will launch starting in Spring 2020, and they all feature high-res certified audio, built in voice assistants and compatibility with the My JBL Headphones App for customizable audio.

The over-ear CLUB ONE is the most expensive of the set at $349.95/£329.99. For that, you get True Adaptive Noise Cancelation, which will monitor the surrounding sounds where you are and customize the noise cancelation accordingly. JBL promises up to 45 hours of playback time, as well as replaceable ear cushions and a leather headband.

JBL has also revealed its first attempt at a gaming headset and PC speaker range, all under the name Quantum. The company says that its acoustic engineers worked with a host of international players to create an accurate soundscape for people when they play their games. JBL touts its James Bond-esque titled QuantumSURROUND technology as outperforming the most popular spatial sound tech that's found in today's gaming headsets.

The price range here is much wider, beginning at $39.95/£29.99 with the JBL Quantum 100 and scaling all the way up to the Quantum ONE at $299.95/£229.99, with five other headsets in between price-wise. The Quantum ONE is the only headset to feature QuantumSPHERE 360 technology, which the manufacturer says will use head-tracking sensors and algorithms to let competitive players hear the surrounding sounds of in-game enemies.

Most players will likely opt for a lower-priced headset, since this is seemingly targeted at aspiring pro players. The cheapest headset to feature the QuantumSURROUND tech is the JBL Quantum 300, at $79.95/£69.99. All of these headsets are compatible with Xbox, PC, Mac, PlayStation, Nintendo Switch, mobile and VR. Finally, JBL has a PC gaming speaker on the way as well, the JBL Quantum DUO, which is $149.95/£149.99.

All of the JBL Quantum headsets will start shipping in April 2020.