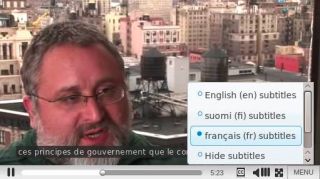 At a glacial speed, video comes to Wikipedia.

The online encyclopedia enabled a HTML5 video player on the site Thursday to let users add multimedia content to the site's articles.

The project is a collaboration that's been in the works since 2008, one that's been mired by infrastructure upgrades, personnel changes and other problems.

However, with help from Google and the open-source video start-up Kaltura, Wikipedia finally supports moving pictures.

Before the launch ,Wikipedia only had about 6,000 videos on the site. It was a patchwork of vids uploaded for beta testing using an older player called Ogg Theora.

The more limited player was replaced by the new TimedMediaHandler extension.

It comes with advanced closed captions and other timed text support.

The closed captions are easily translatable into other languages, so they won't only help hearing-impaired viewers, but also make video content more accessible to an international audience.

WebM is for movie

WebM is a flexible multimedia format that changes its quality based on available bandwidth. It works on mobile phones as well, though Wikipedia hasn't enabled that feature yet.

The open format will go a long way to making videos accessible to readers regardless of connection speed.

Common use is common curiosity

Unfortunately, putting video in a Wikipedia article isn't as easy as embedding a video from YouTube into a blog.The videos all have to be uploaded to Wikimedia to insure the contents' perpetuity.

If videos were hosted from a mishmash of third-party sites, one of those services could go down, leaving holes in Wikipedia's articles. It also means those third-party sites won't be collecting data from readers either.

To handle the influx of new content, Wikimedia spent a long time overhauling its media storage infrastructure to keep up with the increased demand - one reason the project took so long to complete.

Although now, after the many hurdles, the online encyclopedia one ups its paper-bound brethren with the addition of videos, the need for content to be royalty free will mean vids won't instantly flood Wikipedia's online pages.

Expect videos to slowly creep into Wikipedia articles as the knowledge site starts a new media rich chapter in its open-source service.