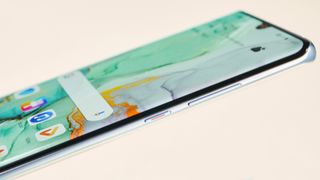 Update: Huawei has removed the lock screen ad wallpapers from its servers, which means it shouldn't be pushed out to any more handsets, but you'll need to manually remove it from your phone if you received the ad.

The firm hasn't provided a reason as to why the ad appeared on handsets, but its statement (below) explains how you can remove it from your device.

"Dear users, we thank you for your candid comments, we are sorry for the inconvenience caused to your experience.

"Please kindly be informed that we have taken down those lock-screen images from our servers, as they should not be appearing on lock-screen interfaces.

"For the image/s already downloaded to your phone, you may delete as per following:

"1) When the image appears on the screen, slide up from the bottom edge of the screen, and the operation toolbar appears;

"We will continue to improve our services and brings you excellent user experience."

Huawei has had a rough few months, and things appear to be getting worse as multiple reports across the web claim the Chinese manufacturer has now pushed ads to the lock screens of its phones without alerting users, or asking for permission.

A number of disgruntled Huawei owners have taken to Twitter to voice their displeasure at being greeted with a 'Booking.com' logo on their lock screen wallpaper.

It's not appearing on every handset, and it appears it's only the pre-installed background wallpapers which have the logo. If you opt for your own lock screen wallpaper, you shouldn't get the ad.

So far, Huawei P30 Pro, P20 Pro, P20, P20 Lite and Honor 10 handset owners have reported seeing the ad, but the two Huawei P30 Pros in the TechRadar office are currently Booking.com-free - so it's certainly a sporadic issue.

So far, Huawei hasn't commented on the reports, so we don't know the exact reason for its actions - but money (unsurprisingly) could well be a key driver as it looks to generate new revenue in the wake of international uncertainty about its future in the smartphone market - at least in terms of using Android.

We have contacted Huawei for a comment, and we'll update this article once we get a response. For now, you may want to change your lock screen wallpaper on your Huawei handset if you don't want to see an ad.