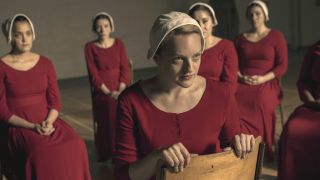 And finally, it is all over. But for those who are a little bit behind, you can still watch Handmaid's Tale online. The show had an epic finale filled with plot twists and hard hitting moments, the perfect end to a stellar season.

Watch Handmaid's Tale online: when and where?

The entire show has now aired but luckily, you can still catch all of the action no matter where you live.

We've listed all of the best locations to catch up on the show down below.

The Hulu-made dystopian show powered through two seasons that left viewers craving more and luckily, more came. As one of the most horrifying shows around, it's a tough but incredible watch, one of the best around - a pretty big claim with the likes of Chernobyl winning over TV viewers.

For those that watched the first two seasons of the show, this picks up where it left off (but don't worry, no spoilers). The show has kept its excellent writing and visuals but has taken a twist in the story, keeping a tight-hold on our interest.

So no matter where in the world you're living, this is a complete guide to how to watch Handmaid's Tale online. We've tracked down all of the locations, times and prices for a number of countries across the world.

And if you happen to be away on holiday right now and want to catch the whole show then don't worry - we've also listed how to watch Handmaid's Tale online when you're away, meaning you won't miss out.

How to watch Handmaid's Tale online in the US:

As a Hulu exclusive, it is no surprise that for those in the US, that is the sole place to watch Handmaid's Tale online.

The good news here is that Hulu offers two separate packages, which means you get some choice in how much you pay.

Hulu offers a free month with its smaller package and a week with its bigger option. Prices start at $5.99 a month with Hulu and go up depending on which package you choose.

How to watch Handmaid's Tale online in the UK:

If you're watching from the UK then the channel to watch from is Channel 4. You can either watch the show live on TV or catch up on All 4.

The show is also aired on both Now TV and Sky, however if you go with Now TV it will be a season behind, only showing the first two.

We all know Sky isn't the cheapest option so if that's where you're planning on watching it, consult our Sky TV deals first for the best prices.

How to watch Handmaid's Tale online in Canada:

For those wanting to watch Handmaid's Tale in Canada, Crave is the way to go.

You can pay for Crave on a monthly basis or get an annual subscription. If you pay for one month, Crave will usually offer up a second completely free.

Prices vary for Crave but you can get packages including Hulu from around $20 for the month. The entire season is now available to watch whenever you want on Crave.

How to watch Handmaid's Tale online in Australia:

The place to watch Handmaid's Tale in Australia is SBS. Episodes air every Thursday at 8.30pm but you can then always watch them on SBS on demand.

The TV streaming service 'Stan' also has all of the episodes of season three.

You can sign up for a free 30 day trial and hopefully watch the whole show in that time. Or, pay from just $10 a month to get the service.

Watch Handmaid's Tale online from outside your country:

If you find yourself in the unlucky position where you're out of the country, on holiday or temporarily abroad when you want to watch the show, don't panic just yet - there is still a chance to watch Handmaid's Tale online in all of its glory. Using a little handy trick, you can get around geo-blocks and digital borders using a VPN.

This will allow you to gain access to all the dramatic Handmaid's Tale content without even having to be in one of the countries its airing in by changing your IP. That way you can binge watch the show on your holiday.

Which VPN is best for you? Our personal favourite is ExpressVPN.

We've done the easy part for you and tested over 100 Virtual Private Networks and rank ExpressVPN as the number one best. It's quick, robust, secure and incredibly easy to use. It's compatible with devices like Amazon Fire TV Stick, Apple TV, Xbox and PlayStation as well. But there are more fantastic VPN options out there as well:

ExpressVPN is the best all-round VPN for streaming and comes with a 30-day money back guarantee if you want to give it a try. Or sign up for an annual subscription and gt 49% off and 3 months FREE.