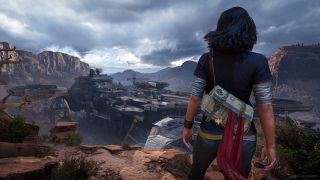 We're fast approaching the anniversary of the death of Stan Lee, the legendary comic-book creator responsible for designing beloved characters such as Spider-Man, the X-Men and, yes, The Avengers.

Despite his passing, Stan 'The Man' Lee has played an instrumental part in guiding Crystal Dynamics – the studio behind the upcoming Marvel's Avengers game - in its bid to tell an original, and authentic, Marvel story.

We sat down with Scot Amos, head of studio at Crystal Dynamics, to have an emotional discussion about how Stan Lee's unique philosophy has influenced Marvel's Avengers.

Power of a fan base

A handful of the Crystal Dynamics team - including Amos - got the opportunity to meet Lee before his passing, and to ask for some direction with regards to the Marvel's Avengers game. But what do you ask the father of comics?

"Stan was a complicated guy," Amos tells us, speaking on behalf of Virgin Media. "He just loved his characters. We actually asked him, what does he want to do and what is his characterization. We had questions through fans and members of even Marvel, saying, 'Well, what can we ask him? What is his relationship [with us]? What do we have to do?'"

Ultimately, Lee's influence was more philosophical than anything. While he may be the father to the Avengers characters themselves, Crystal Dynamics has chosen to put their own stamp on the legacy of 'Earth's Mightiest Heroes'. But Lee's passion for the Marvel fan base is something which has been passed down to the team.

"The beauty of Stan was that he made these characters because he wants to love them and enjoy them," Amos explains. "He had this perception that any comic could be somebody's first - and that stuck with me.

"It's true. This could be the first time you've heard of Captain America or Hawkeye or Thor, and how do I make sure you don't feel left out or like 'I don't know who these characters are' or 'I didn't read the comics' or 'I didn't see the movies'. I don't want that ever.

While it's important for Crystal Dynamics to put its own stamp on Marvel's Avengers, and create a unique experience that is still true to the universe, the team still feels it's important to consider the man who created it all.

"At the highest level, it's taking the pearls of wisdom from this guy who created an amazing cast of characters and just saying 'how we pay proper homage not through one specific quip or even the cameos'", Amos tells us. "It's more of, how do we take that mantle, and that responsibility, and saying 'how do we take these characters to new generations and next generations of fans and players'."

The inclusion of Kamala Khan (a.k.a. Ms. Marvel) is a big part of this. Kamala will act as the main protagonist in Marvel's Avengers and it's a welcome addition, especially considering the character hasn't transcended to film fame yet. Crystal Dynamics has an - almost - entirely clean slate to work with.

"When it comes to Kamala, I'd love for him to be around right now to say 'what do you think of this?'," Amos laments. "I'm tearing up thinking about the fact he's not here for that, but at the same time, we have very great partners inside of Marvel games who just know these characters. I think these guys have been not just caretakers but creators, and actually empowered us to be telling original stories with these amazing icons and I just feel privileged."