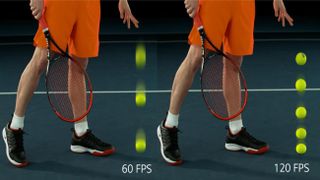 Now that our TVs have reached the next level in terms of resolution in the form of 4K, and contrast thanks to high dynamic range, the next area for improvement looks set to be high frame rate.

A terminology carried over from the age of celluloid cinema projectors, frame rate refers to the number of still images (frames) flashed on screen per second, creating the illusion of a moving image. If you’re a film buff you’ll no doubt know that most hollywood films are shot and projected at 25 frames per second (fps).

This allows for a ‘motion blur’ whenever a camera swiftly pans or tilts, replicating the human experience when turning our heads.

There have been a few notable deviations from this (think Peter Jackson’s Hobbit trilogy, which was shot at 48fps), and there is even a current wave of thinking that all cinema should be shot at a higher frame rate in order to provide a richer visual experience.

At the moment though, HFR content is mostly being touted as a desirable feature for gaming, sports, and documentaries where tracking motion is more important than a cinematic finish.

What is high frame rate (HFR)?

High frame rate is a slightly nebulous term at the moment, but refers to a frame rate higher than 25fps for motion pictures and 30fps for all other outputs. Just to put it in context, it's thought that the human eye is capable of processing 1000fps, maybe even more.

An image shown at even 48fps allows us to process far greater depth and detail. This is both a blessing and a curse, as images shot in a higher frame rate often look ‘fake’, probably because we can see the details that give away that the actors are standing on a set.

But of course this is a problem that doesn't affect documentaries, sports broadcasts or games. In these mediums, the more visual information you have, the better.

The amount of content available in HFR is slowly increasing, and TV companies are starting to make sets that are capable of dealing with this content.

It’s easy to confuse frame rate and refresh rate, especially as one fps translates to one Hz (the measure of frequency for a TV refreshing), but while fps will always directly translate to number of frames on the screen per second, Hz can relate to any change on-screen.

This disparity means that manufacturers like Panasonic can claim that their TVs have a refresh rate of 2200Hz, while still only running at 120fps.

Panasonic isn’t the only manufacturer with a 120fps set hitting the market this year. LG’s OLED range has the W8 and E8 capable of hitting 120fps - and it's likely that Samsung and Sony will follow suit this time next year.

But TVs being capable of handling 120fps and you being able to actually view that content are not the same thing.

There are currently very limited options when it comes to getting HFR content to your set. 4K HDR Blu-ray is capped at 60fps (which is still high, but not game-changing), the PS4 Pro and Xbox One X can output at 60fps, and the Xbox One X has the capability to output at 120fps - at least, on certain titles.

Standard HDMI cables aren’t capable of dealing with HFR content, so you’ll need to have an HDMI 2.1 (or Premium High Speed HDMI) cable. What further complicates matters is that not all the HFR TVs on offer work with HDMI 2.1.

There are streaming services – like YouTube – that have started showing HFR content, but when LG was showing us it’s 2018 OLED range, it claimed that the YouTube TV platform differed from the mobile one and that the HFR content wasn’t available on TVs yet.

What this means is that in order to get 120fps content on your TV, your only options at the moment are to have the content downloaded onto a USB-stick (which no-one does) or use a games console that increases the frame rate, but drops the resolution down from 4K to 1080p.

It could well be that we’re just at the early stages of this technology, and it’s not going to be until we get the next generation of games consoles and TVs that high resolution, high frame rate content comes into its own. For now, we certainly wouldn’t advise buying a TV based on its ability to handle HFR content, especially if it doesn’t have the inputs to support it.