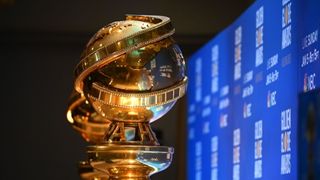 Update: It's all over! The awards have all been handed out in Los Angeles and awards season has well and truly been kick-started. Unless you're planning to catch-up on the ceremony (or if you don't mind spoilers beforehand), you can head to our Golden Globes 2020 winners article for the full and complete list.

Don't call it a warm up for the Oscars! Thanks to its celebrity audience and acerbic hosts, the Golden Globe Awards have become a fixture in their own right on the TV calendar. And you can watch every minute of red carpet revelry and award giving from just about anywhere by following our Golden Globe live stream guide.

Celebrating the biggest and best names in the world of television and cinema, the 77th Golden Globes is once again taking place in early January to really mark the start of the road to the Academy Awards.

This year's spectacle will come from The Beverly Hilton hotel in Beverly Hills, California.

The ceremony itself is due to start tonight at 5pm LA time, so that's 8pm ET, 1am GMT and 12pm AEDT on Monday. That's following coverage of the red carpet arrival, of course, which kicks off a couple of hours beforehand.

English comedian Ricky Gervais is back at the helm for a record fifth time, which means no A-lister can rest easily - Brad Pitt, Angelina Jolie, Mel Gibson and many more have been lampooned by his barbed comments over the years.

And who will likely be taking home a little gold gong tonight? Some of 2019's biggest films, including Netflix's The Irishman and Marriage Story, will compete for the Best Motion Picture - Drama award. While the likes of Daniel Craig, Leonardo DiCaprio, Eddie Murphy, Al Pacino, Scarlett Johansson and Jennifer Lopez are all up for acting prizes. The ever-reliable Tom Hanks will be honored with the Cecil B. DeMille Award for his glittering career.

On the TV side of things, there's fierce competition between some amazingly successful shows. Binge watchers will need to divide their loyalties between the likes of Big Little Lies, The Crown, The Morning Show, Succession and, of course, Game of Thrones.

Whether you're a massive movie buff, somebody that loves to see 'who' the stars are wearing or just want to see how outrageous Gervais will be, the Golden Globes is always worth a watch. And following our guide will let you work out the best way to get a 2020 Golden Globes live stream from wherever you.

Keep scrolling if you want to know your viewing options in the US, Canada, UK and Australia.

But it's worth noting that if you're away from your country this weekend and were hoping to watch your home coverage on your laptop or mobile, it will inevitable be geo-blocked. Annoying, but definitely not unsurpassable...by using a VPN, you can change your IP address to a location back in your own hometown or country that will then allow you to stream the event as if you were sat back at home.

A VPN is perfect for this as it allows you to change your IP address so you appear to be in a completely different location. We've tested hundreds of VPNs and can recommend ExpressVPN as the outright  best VPN currently available.

ExpressVPN (which comes with a 30-day money back guarante) is the #1 rated best in the world right now thanks to its speed, security and ease-of-use. You can watch on many devices at once including Smart TVs, Fire TV Stick, PC, Mac, iPhone, Android phone, iPads, tablets etc. Check out ExpressVPN and get 49% off and 3 months FREE with an annual plan.

How to watch the 2020 Golden Globes: live stream in the USA

While the red carpet coverage will stream for free on the Golden Globes website, NBC has the rights to air the ceremony in the US. So assuming NBC is one of the television channels you can get, then you're good to go.

Or if you would rather stream the show straight from your computer, mobile phone or tablet then you can head over to NBC's website to watch.

Don't want to pay more than you need to for your cable subscription? Then don't worry, there is a range of different streaming services now available to help you watch the show, all at different price points. You can see a list of options below:

The bonus of the above options is that they all have some kind of free trial. So if all you care about is getting a Golden Globes live stream and not much beyond, these are well worth a look.

How to stream Golden Globes live in Canada

Fans in Canada are in luck as CTV will show the 77th Golden Globes live on television. However, if you don’t have a TV, you can still watch the awards show on the network’s website though you will have to select your TV service provider and sign in with your CTV account. It all starts at 8pm ET/5pm PT.

How to watch a Golden Globes live stream in the UK

Sorry UK folks - it looks as though nobody has thrown their hat into the ring to broadcast the Golden Globes this year. Seems like a big shame considering Gervais is on MC duties and the likes of Emma Thompson, Olivia Colman and Anthony Hopkins are all nominated this year.

The only way that we can think of watching it - without referring to some dodgy stream you've seen on Reddit, is to go down the VPN route, change your IP address and watch as if you were somewhere else in the world.

How to live stream the 2020 Golden Globes in Australia

You'll need Foxtel (or Austar or Optus Television) Down Under as the Golden Globes will be broadcast live on Arena, following red carpet action on E! The ceremony starts at midday on Monday.

If you're away from your TV, then you can always watch on mobile via the Foxtel Go app, too.

There's also the option of using a VPN as described above if you're away from home and still want to catch that coverage.