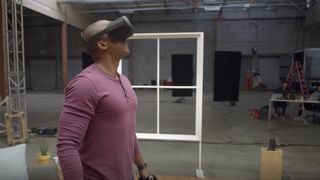 Facebook’s dedicated, wire-free headset codenamed Project Santa Cruz will be in the hands of developers starting early next year.

This headset was first shown off in 2016, but at Oculus Connect 4, Facebook CEO Mark Zuckerberg showed off a revised version of the headset, which will boast full inside-out tracking – meaning the sensors required to track your every move are built right into the headset.

Project Santa Cruz will even be able to track the full range of motion of the Oculus Touch controllers, which together with the inside-out tracking will grant you total freedom from your PC and the physical limitations that come with being tethered to it.

A few questions remain: how much will this headset cost? Facebook and Oculus haven’t pinned down a name yet, so it’s possible that this could be the true successor to the original Oculus Rift. As such, it could be in the similar pricing ballpark of $599/£599 that the original model launched at.

Also, what will the quality of the experiences that it provides be like? From our early look at Oculus Connect 4, the graphical fidelity shown off in the prototype experiences didn’t look any better than what we've seen with the standalone Google Daydream headset.

We ask this because in the same breath, Oculus announced the Oculus Go, a new standalone headset that will be available early next year for the surprisingly low price of $199 (about £150, AU$255). Given that this headset boasts a WQHD display capable of 2,560 x 1,440 resolution, we wonder how high Oculus can raise its own bar until Project Santa Cruz releases.