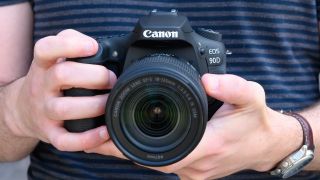 The Canon EOS 90D has been the company's worst-kept secret for some time, first leaking out through a video on Canon Australia's YouTube channel, before a product sheet with features specs joined it.

Now the model has been officially announced, confirming what we thought we knew along with a handful of further details.

The EOS 90D joins Canon's enthusiast-level DSLR stable, following the EOS 80D that arrived back in 2016. It's pitched at sports and wildlife photographers who may have been drawn to the likes of the EOS 7D Mark II and previous EOS 80D, although it officially serves as a replacement for the latter model.

Here, a number of the 80D's features have been either boosted, or tweaked at the very least, and the sensor is among them. In place of the EOS 80D's APS-C 24.2MP sensor, the EOS 90D gets a fresh 32.5MP alternative with the capability of recording videos in both 4K and Full HD quality.

The new camera is driven by a DIGIC 8 processing engine, the same one that previously found its way into the EOS Rebel SL3 / EOS 250D and PowerShot G7 X Mark III among other models, and this enables it to fire bursts of images at 11fps in live view, or 10fps when using the viewfinder (with tracking AF).

The EOS 90D also debuts a 220,000-pixel RGB+IR metering sensor with Flicker Detection, while Dual Pixel CMOS AF has also made the cut – this can be called upon when recording videos in both 4K and Full HD resolutions, and promises to focus smoothly and swiftly when using live view too.

Fast and accurate eye autofocus tracking – a sought-after feature on many recent cameras – is also claimed for the new model, although the 45-point AF system that comes into play when using the viewfinder appears to be unchanged from before.

Other video-centric features include Full HD recording at frame rates up to 120fps for slow-motion output, together with a cropped video shooting mode for extended reach and a microphone port.

Around the back, the 3-inch vari-angle touchscreen appears to be unchanged from the EOS 80D's, although next to this is a new multi controller, which allows for the focusing point to be conveniently shifted around the frame. The Intelligent Viewfinder, meanwhile, covers around 100% of the scene.

The battery is the same LP-E6N cell that featured in the EOS 80D, but the camera arrives with far better battery life, with 1,300 frames per charge quoted versus the EOS 80D's 906 frames.