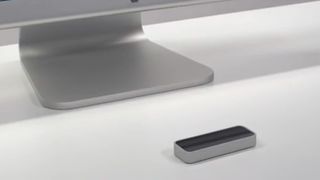 A company called Leap Motion has launched 'the world's most accurate' 3D motion control device, which it says is 200 times more sensitive than Microsoft's Kinect peripheral.

The almost insanely cheap $69.99 (£44), 4-inch camera plugs into your computer via USB. It tracks motion in 3D space from your fingers, pencil or other objects you place in its line of sight.

The makers say they hope to "change the world" by opening-up motion control gaming, design, robotics and medical applications and, yes before you ask, Minority Report or Iron Man-style screen control.

The Leap, which will ship this winter, lays flat on your desk and "creates a three-dimensional interaction space of 4 cubic feet to control a computer more precisely and quickly than a mouse or touchscreen," the company says.

Accurate to 1/100th of a millimeter, it also incorporates multi-touch gestures like pinch-to-zoom and can recognise the movements of all ten fingers.

The video demonstration (below) shows-off a first person shooter a flight sim and also 3D drawing and mapping applications.

Leap says its technology is versatile enough to be used in smartphones, tablets, refrigerators and cars and will be tailored as such in the future.

"One day 3-D motion control will be in just about every device we interact with, and thanks to the Leap, that day is coming sooner than anyone expected," says CEO and co-founder Michael Buckwald.