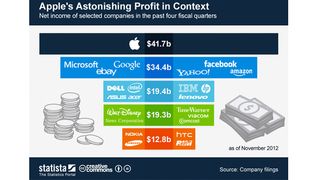 Despite missing lofty Wall Street expectations for two quarters in a row, Apple still racked up incredible profits of $41.9 billion (UK£26.2, AUD$39.9) over the course of the last four quarters.

According to figures from Statista, that's around $7 billion (UK£4.3, AUD$6.7) more than the combined net profit of Microsoft, Google, Facebook, Amazon, Yahoo and eBay.

In basic terms, that makes Apple twice as profitable as the entire PC industry.

When Statista, which gained its information from official company filings, compares Apple with some of its key smartphone and tablet rivals, the difference is starker still.

Samsung has enjoyed a barnstorming last twelve months, but when its profits are combined with fellow mobile companies RIM, HTC, and Nokia, the total is just over a quarter of Apple's yearly earnings - $12.8 billion (UK£8, AUD$12.2).

The remarkable figures come amid much negativity around Apple's performance in the stock market over the last couple of months, mainly due to it not selling quite as many iPads as Wall Street expected.