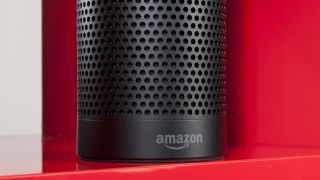 Amazon Echo might be getting a little brother soon.

A recent report from The Wall Street Journal says Amazon is making a beer can-sized version of the A.I.-equipped Bluetooth speaker and, more interestingly, that it would be revealed in a few weeks' time.

The new speaker, codenamed "Fox," will likely come in at half the size of the current model and will cost less than $180 (about £120/AU$260), the current cost of the Amazon Echo.

But all that cost cutting and space saving will come at a price. According to the report, the miniature Echo will use a push-to-talk button that activates Alexa, Amazon's A.I. assistant, instead of always listening for a keyword. This is done to conserve battery life, but it will require you to get up anytime you want to get Alexa's attention.

Another new addition to the package, according to WSJ, is a docking station that will be used to charge the Echo 2 when it's not in use. (The current model requires a constant power source.)

A refined, portable Amazon Echo would make a lot of sense, as the original became somewhat of an overnight success for the company. The only thing Amazon's updated speaker is missing now is a release date.