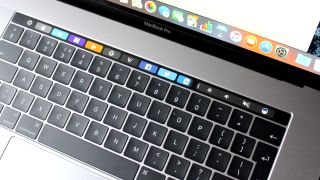 Just a few hours ago (as of this writing), Apple said it was serious about making Macs great again. Hours later, we've learned that part of that plan could be a Touch Bar-equipped keyboard designed for a future iMac.

Three new patent applications (20170090596, 20170090597, and 20170090654) spotted by Patently Apple describe such a peripheral as a “Keyboard with Adaptive Input Row.” The document and drawings suggest the Cupertino-based company is entertaining the idea of adding a Touch Bar to a new version of its wireless Magic Keyboard.

Just like the Touch Bar on the MacBook Pro, this adaptive input row would add a long strip of interchangeable virtual buttons in place of the traditional function keys. These digital buttons would act as shortcuts and change according to which program users had open or what tasks they were performing.

It’s not a stretch to think Apple would introduce a Touch Bar-enabled Magic Keyboard in the future. It should be relatively easy to incorporate the touch-sensitive OLED panel into a dedicated keyboard – at least simpler than into a full-featured laptop.

At the same time, adding the digital input row would bring Apple’s acclaimed desktops up to speed with the latest MacBook Pros, protecting another line of Apple products under Touch ID. If Apple is truly bullish on its Touch Bar technology, this would be as fine a place as any to put it next.