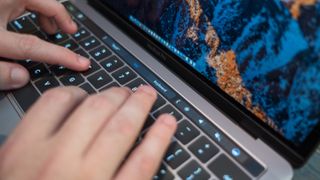 New benchmark results have leaked onto the internet, and it appears to show a brand-new MacBook Pro, which will be powered by Intel’s six-core i7-8750H processor.

According to the benchmarks, which are listed on Geekbench’s website, the “MacBookPro14,3”, as it’s called there, will have the six-core chip. It’s capable of a base clock of 2.21Ghz, and a boost of up to 4.1GHz, and those two extra cores look set to seriously increase the performance of the MacBook Pro compared to the previous version, which has a quad-core processor.

Geekbench is a cross-platform processor benchmark that is used to see just how powerful the CPUs in computers are – we use it ourselves as part of our extensive reviewing process. According to the Geekbench results, the new MacBook Pro scored 4,902 in the single-core test, and a whopping 22,316 in the multi-core test.

This blows away the performance of the 13-inch MacBook Pro with Touch Bar (mid-2017), which scored 4,383 in the single-core test and 9,313 in the multi-core. If these benchmark results are genuine, then the new MacBook Pro will be a seriously powerful device.

Getting ready for WWDC

The benchmark results suggest that the MacBook is running macOS 10.13.4 as its operating system, and that it will come with 32GB of DDR4 RAM. This is twice the amount of RAM found in the previous top-of-the-range MacBook Pro, which suggests that Apple could finally be moving on from its 16GB cap.

Of course, this is all rumor and speculation at this point, but with Apple’s WWDC 2018 event happening later today, we may see the new MacBook Pro announced then.