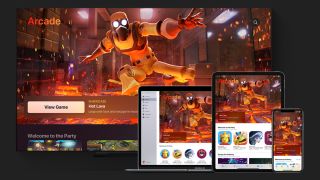 Apple has flicked the switch to enable Apple Arcade on the macOS Catalina beta, suggesting a full, public launch of Catalina is just around the corner. If you're running the beta on your Mac, you can get gaming now.

Apple Arcade has already gone live on iPhones, iPads and Apple TVs, with the roll out of the latest software updates, so if you're invested in the Apple ecosystem you may already be playing some of the exclusive games on offer.

Apple Arcade can be found inside the Mac App Store – if you're still on macOS Mojave, then you'll just see a message saying "Welcome to Apple Arcade on Mac!" together with a button to check for updates.

Apple has promised that macOS 10.15 Catalina will be pushed out to users at some point during October, and that point would now appear to be imminent, with Apple Arcade and plenty of other pieces in place.

A couple of days ago Apple released the Gold Master (GM) version of the software to developers – basically the version of the operating system that puts a period at the end of the beta testing stage.

The macOS Catalina roll out could happen any day now, and when it does, you'll be able to dive straight into Apple Arcade on your Mac.