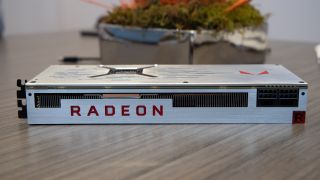 A new report alleges that AMD’s next-gen 7nm Navi GPUs won’t emerge until October of this year, which is later than previous speculation that pointed to a summer release.

You may recall that last month, references to Navi graphics cards were uncovered in the source code of macOS, and this underlined previous buzz from the graphics grapevine which was hopeful for a July launch.

That said, going back further to a leaked roadmap from AMD, this suggested that Navi would pitch up in the second half of 2019, so October is still in line with this.

The October date comes from sources who apparently spoke to French tech site Cowcotland, not the most renowned source of accurate rumors – although it did recently chip in with some interesting info on the availability of the Radeon VII in France. Still, we should take this speculation with a very hefty pinch of the white stuff.

However, it does make some kind of sense, and not just because it ties up with the aforementioned leaked roadmap.

We just mentioned the availability of the Radeon VII, which is AMD’s first 7nm graphics card – though note that it’s still based on the current-gen Vega architecture, not Navi – and stock of that GPU is very thin on the ground, at least going by what we heard during the launch last week, and from what we can observe now.

For example, in the UK, there are still some Radeon VII cards available at the main stockist, Overclockers UK, but the caveat is the remaining Gigabyte and MSI models are priced at an eye-watering £799.99 – so it seems that folks aren’t quite prepared to pay this much.

All the other cheaper cards – pitched as low as £649.99 in the case of Sapphire – sold out within a few hours of the launch (we were watching, and indeed that Sapphire Radeon VII was sold out almost immediately).

Pop on over to Newegg in the US, and every single Radeon VII GPU is sold out (they are all priced at the same $699.99, which is the recommended price tag).

By all accounts, there were only 20 Radeon VII cards in the whole of France at launch, as Cowcotland reported last week.

Anyway, the point to bear in mind here is that there are seemingly clear issues with Radeon VII production, and a lot of that may be down to the Lunar New Year holiday in China, which sees the big manufacturing factories close.

And catching up with rebalancing Radeon VII supply and demand could take its toll on the production schedule for next-gen Navi graphics cards. Particularly when there’s another potential force to consider here, namely that Navi GPUs may also be used outside of the PC arena in next-gen consoles (according to the rumor mill, anyway), thus exerting more pressure on the supply chain.

As ever, we will just have to see how things pan out, although given all this, it wouldn’t be surprising to see the rumored Navi GPUs which are in the pipeline get delayed until much later in 2019.

Note that the Navi graphics cards we are expecting to see this year will be more budget-friendly mid-range models, with the high-end efforts aimed at the likes of enthusiasts and hardcore gamers not expected to turn up until 2020.

We are expecting to see four models later this year – Navi 16, Navi 12, Navi 10 and Navi 9 – according to the info turned up by digging through the macOS Mojave source code.