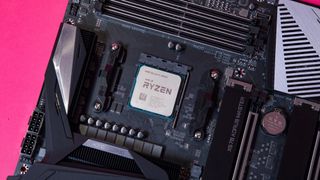 AMD’s Ryzen 9 3950X lands in November (after it was delayed), but beforeit hits the street some interesting fresh details have been spilled on the CPU and its overclocking potential.

This comes from hardware vendor Gigabyte which made an overclocking guide for its Aorus X570 available online, detailing the firm’s results when juicing up the Ryzen 3rd-gen processor.

We already knew that the 3950X boosts up to 4.7GHz – or at least that’s the official word from AMD – but that’s over two cores, Gigabyte notes in the documentation (and potentially the wrong – ie not active – cores, another bugbear with Ryzen 3000 CPUs which has been highlighted recently).

So how fast can the incoming flagship chip be pushed over all its 16-cores with overclocking? As fast as 4.3GHz, it would seem, given Gigabyte’s setup which utilized an EK-KIT P360 water-cooling solution and the Aorus X570 Master motherboard. That’s a good chunk faster than the base clock speed of 3.5GHz, of course.

Gigabyte further observed that the temperatures witnessed during the overclocking session were “similar [to] what we were getting last year using a Ryzen 7 2700X”. So for this 16-core behemoth to be pushed across all its many cores and be performing in similar thermal terms to a 2nd-gen 8-core model is, well, quite impressive.

Also remember that the Ryzen 9 3900X recorded a Cinebench R15 result of 3,097 when we reviewed the chip, so that makes the incoming flagship something like 27% faster at stock speeds.

Of course, this is only one benchmark, and as such hardly the whole performance picture – but still, it would seem that things are shaping up very nicely for the Ryzen 9 3950X, and it could help to hammer home the big gap AMD continues to open up in sales over Intel (at least in the desktop market).

Although how easy it will be to buy one of the things may be another matter entirely, so let’s hope the launch delay is about suitably ensuring demand doesn’t once again completely outstrip supply (as with the 3900X).