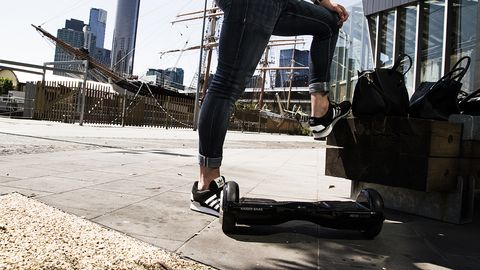 The Revo Glider is just fun to use, which is the best possible accolade it can get. It's not perfect - it could use some more grunt and a better charging interface, but for the joy of riding it's completely worth it. It's just a shame it's illegal to ride it outside in many places.

When Dean Kamen invented the Segway, he famously said that his motorised personal transporter would "be to the car what the car was to the horse and buggy."

History has proven just how wrong he was on that particular front. But the idea of a self-balancing, two-wheel personalised transportation device lives on in the form of these newer self-balancing "hoverboards".

There are models flooding the world with different brands and names on offer, but they all look the same, likely being pumped out en masse from the same set of Chinese factories. The unit I tested was dubbed the Revo Glider from Kaiser Baas, but for all intents and purposes it's going to be pretty much the same device regardless of the brand you get.

While the general aesthetic is fairly universal, that doesn't really take away from what this thing actually does. Thanks to its internal gyroscopic motors, the Revo allows you glide across the ground, as though you were born with wheels instead of feet. Subtle shifts in your body's centre of gravity completely change your speed, direction and momentum, and that control is exhilarating.

There's not a lot to the design of these things – it kind of looks like a Segway accidentally knocked up a skateboard and then left town to avoid the alimony payments.

Two front facing wheels bookend the board, which sits about mid-height of the wheels and features two separate foot pads – the gyroscope kicks in when it feels your weight go down on the pad.

Looking down from atop the glider is a pair of lights, one indicating the battery is charged, and another to indicate when the gyros are active. When the power runs down, the solid green light starts flashing before it turns amber and the board starts beeping at you to charge up again.

On the front of the board are two arrays of blue LED lights, which seem to indicate when the gyro is working on each particular half of the board. The connecting part between the two foot stands rotates slightly to help you quickly turn or spin around.

On the back you'll find the power button and the three-pronged proprietary charging port. That charging port is one of the Revo's fundamental design flaws, but I'll complain about that a bit later.

According to the specs, the Revo has got a range of about 20km on a single charge, can travel at 12 kph and charges in three hours.

Given the fact that governments and councils around the world are outlawing the use of devices like the Revo on roads and sidewalks, it's unlikely you'll get to use one on a straight 20km journey. Around here, we just burn around the office like madmen, occasionally risking a trip to the local cafe. Either way, it's not like the endurance skills were ever put under extreme pressure.

Let's get one thing clear - this thing isn't a hoverboard. It's nothing like the hoverboard. I get that people want to celebrate like it's Marty McFly's 2015, but let's not confuse things like what Lexus is doing with what we're testing here.

That said, there's simply no understating how cool riding one of these devices is. It's like hopping on a Segway, except without the connotations of lazy douchiness.

The first time you hop on though, it might be worth using somebody else's shoulders for balance - it doesn't take long for the Revo to become second nature, but at first it's almost natural to constantly overcompensate when you're trying to find the balancing sweet spot.

Even if you are using someone else for support, it's still important you don't panic if things feel like they're slipping out of control – there's a good chance you'll end up bruising your backside (like this reviewer's boss did) when the Revo goes flying out from under you.

After those first few minutes of coming to grips with shifting your body's weight around to move, the Revo becomes like an extension of your body. It's not – it's still way too easy to clip something with a wheel at high speed and go flying, especially when competing in the hastily organised Office Championships, racing around an indoor course as part of your review.

At high speeds, you'll feel the Revo push back against your feet in order to maintain your balance, although it is possible to force yourself off by pushing a bit too hard. The Revo will start beeping at you once you crest that 10kph speed barrier, and you'll instinctively slow down when you hear that noise. But aside from high speeds or clipping an obstacle, it's actually unlikely you'll fall off this too often.

But exhilaration aside, there are some issues with using the Revo as a regular transportation method. The Glider is perfectly well adapted to screaming along flats, but introduce even the slightest bump in the path and you could be in trouble.

Trying to get from the road onto a driveway, for example, was impossible. Firstly, it scraped the hell out of the bottom of the Glider, but also the 17cm wheels aren't big enough to absorb the change in terrain.

Even more of an issue is that the the Revo ultimately doesn't have enough grunt to climb up those small, one inch steps in the first place.

So ultimately, you're kind of stuck riding around indoors, on soft, carpeted surfaces – even speeding along your standard footpath is lace with risk as most footpaths are in various states of disrepair.

Still you can have a lot of fun racing around on carpet.

The other big challenge with the Revo Glider is its entire approach to charging.

Firstly, the board will start beeping when the battery gets low. That's far from an issue, except that it seems the point of notification is roughly when the battery is still a third full. And it's not a subtle beeping – it's a loud, obnoxious beep that you can't turn off unless you kill the power entirely.

When you do try and plug the Revo in, the proprietary 3-prong charger is awkward to inset into the port. It needs to be targeted at just the right angle (which isn't straight up or down, for some reason) before it will connect.

Then, once inserted, finding out if the board is actually charging can be a challenge. If the Revo is switched off, you get no feedback on the board itself – you need to check the LED on the charging brick to see if juice is running into the battery. If the board is on you'll get a solid green light on the battery.

Note that this is far from a deal breaker, but for a $799 device it would be nice to see the user experience be as good as the riding experience.

With a fairly high price tag and the risk of being fined for riding one in many public places around the world, there's a solid argument that you should invest your money elsewhere.

But that argument seems to ignore the pure sense of joy you get from stepping on the Revo Glider and burning around like a two-legged go kart.

It's far from perfect – which isn't that surprising given that the entire category seems to be made up of generic Chinese knock offs. But it is certainly a lot of fun, and you can't ask for much more than that from a device like this.

Zooming around on the Revo Glider is awesome. It's like adventure sports for lazy people, and is a truly wonderful experience.

When you think about it, it's frankly an amazing piece of engineering that allows you to ride around as though your feet are wheels. It's intuitive and easy to pick up, yet challenging enough to stay fresh even after weeks of riding.

The battery life, range and top speed are all pretty good, too, which means you can actually use it as part of your commute. Or you could if it wasn't illegal.

The Revo Glider could really use a refresh on both its charger and its communications – incessant beeping and a not very intuitive lighting system for battery life could definitely use an overhaul.

It could also use a more robust body to take outdoors – after a few weeks, our unit is pretty banged up, with cracked plastic and scuff marks everywhere.

Also, the fact that I could get fined while riding one in public is a pretty big downer.

This is universally the most loved gadget to ever enter techradar towers. We've tested all the latest phones and tablets, 4K OLED TVs and games consoles, but nothing has captured the universal attention of the team quite like the Revo Glider.

The biggest reason for this is that it's fun, and it's accessible – providing you don't fall off when you first get on.

The price is probably a bit high at $799, but you can likely pick one up for significantly less if you shop around. Just be prepared to only use it indoors, lest you tempt fate with a pretty massive fine.