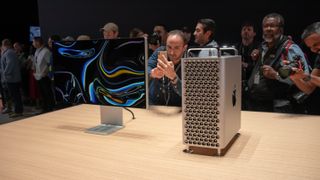 The Apple Mac Pro and Pro Display XDR monitor release date has been revealed as Tuesday, December 10, with the high-end Mac and professional monitor likely shipping soon after.

The Mac Pro (2019) release date was confirmed by Apple itself in an email sent to selected customers.

While it's not certain exactly how long units will take to make their way to customers, you might find a new Mac Pro under your tree for Christmas (if you have a loving relative with very deep pockets).

There had been rumors of a December launch date, and indeed Apple was fast running out of time to make good on its promise that the Mac Pro and the Pro Display XDR were "coming this fall".

The hardware was originally shown off at WWDC 2019 back in June, but we've had to wait until now for an official launch date – and there have been three new iPhones and a new MacBook Pro since then.

That will get you an octa-core Intel Xeon W chip, 32GB of memory and AMD Radeon Pro 580X graphics. Once you start upgrading those different components, the price is going to rise even higher.

For the time being the Apple website still shows the Mac Pro and Pro Display XDR as "coming soon", but that will change on December 10 – when all the questions about shipping and configurations will be answered.