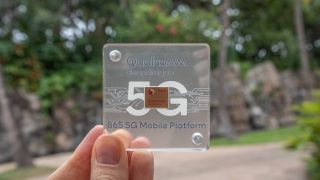 All signs are pointing to the Samsung Galaxy S11 being a 5G phone without requiring users to buy a separate, more expensive 5G variant of the forthcoming handset.

If this trend continues, it means two things: first, the Galaxy S11 is going to be the first 5G smartphone for a lot of people – 5G is going to have its mainstream moment. Second, the specs of the chip strongly foreshadow features of Samsung's next big phone.

Here are the top things the Snapdragon 865 tells us about the Samsung Galaxy S11.

The Samsung Galaxy S11 will be a 5G phone

The Samsung Galaxy S11 is poised to fix the major pain point we've had with almost all 5G phones in 2019: you had to buy a pricey variant of the mainstream phone. Often the 5G phone versions would come later, too.

This happened with Samsung Galaxy S10 5G, Note 10 Plus 5G, and OnePlus 7T Pro 5G to name a few. With the Moto Z3 and Moto Z4, you had to buy a 5G mod add-on. Asking people to wait and spend more money for 5G in its infancy was a tall order.

Qualcomm made it clear that using the Snapdragon 865 chipset is a package deal: it comes with a Snapdragon X55 5G modem, even if the two aren't physically fused together in one chipset. Simply put, if a phone has the 865, it has a 5G chip.

Phone manufacturers could market the 4G LTE speeds in regions where 5G isn't bountiful, but executives we talked to at Qualcomm were quick to point out that no phone maker that they had talked to expressed interest in doing that.

So the Samsung Galaxy S11 and Galaxy S11 Plus, and maybe even the Galaxy S11e if it continues to use a flagship tier chip (like the S10e did last year), should get 5G speeds out of the box. And that's good news for 5G adoption.

Qualcomm did introduce the slightly lower-specced Snapdragon 765 at the same time as the 865 chip, but there's no chance Samsung will stick the premier Galaxy S11 with anything but a flagship chipset.

The S11 release date lines up with the 865 debut

The Samsung Galaxy S11 is rumored to launch at the end of February – traditionally it comes out right before or at MWC. We don't suspect the launch window will change. In fact, there's now more evidence it will stay the same.

That's also when the Snapdragon 865 is schedule to make its way into smartphones. The official statement from Qualcomm notes: "Devices based on Snapdragon 865 are expected to be commercially available in the first quarter of 2020."

Samsung has helped Qualcomm fabricate its chips over the last three years, so first dibs on the Snapdragon 865 – and what may end up being the first mainstream 5G phone – only makes sense in early 2020. In other words, see you at MWC 2020.

This has been one of the bigger highlights of Snapdragon 865, as the chipset has a souped-up image signal processor capable of processing 2 gigapixels per second.

That means the Galaxy S11 could capture 8K video, 64MP screen grabs from video (they're an inferior 8MP on many of today's phones), and super slow-motion video at 960fps without limits – not the 0.8 seconds we're used to seeing from the very few current phones that can even do such high-frame-rate capture.

Samsung's next phone could breath new life into photos, too, with over one billion shades of color and massive 200MP pictures. No, you don't seriously need that many megapixels in a single photo, and you probably won't get all of them. Galaxy S11 rumors point to a still-astounding 108MP sensor.

But Qualcomm made sure to point out that 200MP makes sense when taking a wide photo, say at a concert (the given example), and wanting to crop in later on. You can punch into a scene without a tremendous loss of detail. It's the same reason why we sometimes shoot TechRadar videos in 4K even if we're going to upload in 1080p. Of course, in photos, as megapixels increase, pixel sizes (microns) tend to get smaller, so a dark concert may not be the best choice.

There is one caveat to all of this exciting camera information: using the specs of the Snapdragon 865 is up to Samsung and other manufacturers of individual phones.

Case in point, we were hyped for 4K HDR video capture when the Snapdragon 845 debuted two years ago, only to find out the feature wasn't coming to the Galaxy S9 in the end (Samsung's Exynos chipset, which goes into phones outside the US, didn't have the feature, so it was disabled to create feature parity).

Mobile gaming gets an new way to upgrade

The Samsung Galaxy S11 is likely to continue in the tradition of past Galaxy S phones by pushing its mobile gaming prowess. The Snapdragon 865 chipset just gave us a preview of what to expect.

Qualcomm is claiming 'desktop-quality gaming' with new tools that Samsung can use in conjunction with the Adreno 650 GPU. Desktop Forward Rendering brings desktop quality lighting and post-processing effects, while Game Color Plus smartly boosts saturation and tone mapping (without blanket saturating everything like skin tones).

Most impressive, the Snapdragon 865 supports 144Hz display refresh rates. It lines up with recent leaks that point to the Galaxy S11 having 120Hz refresh rates. Like the 200 camera megapixel support, we don't expect all 865-using phone makers to go to 144Hz, at least not in 2020. But we'll likely see a lot more 90Hz and 120Hz screens.

What we're eager to see, but equally skeptical about, is the ability for the Adreno 650 graphics chip to receive updated drivers (again, like a desktop gaming PC) through an app store. It's built into Android operating system and the 865 chipset, but still up to phone manufacturers to make the drivers available, and we know Samsung has been slow to get regular Android updates out to its consumers.

Everything we've heard about the still-unannounced Samsung Galaxy S11 lines up with the capabilities and release time frame of the Snapdragon 865 chipset. It's pushing 5G speeds, megapixel-loaded camera performance, and gaming capabilities that take cues from desktops and consoles.

We have more than two months before the suspected Galaxy S11 launch, so there's ample time for leaks and rumors to further our understanding of Samsung's new smartphone. However, at this time, the Snapdragon 865 gives us some of the most concrete details on where Samsung and other phone makes will head in 2020.