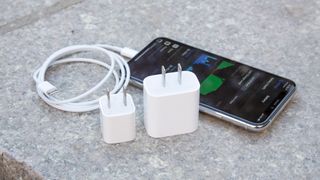 There are few constants in life: you eat, you sleep, and you plug your phone in to charge, but it looks like Apple could do away with that last one, judging by new rumors about the upcoming 2021 iPhones.

The rumors come from top Apple analyst Ming-Chi Kuo, whose research note was seen by MacRumors. In the note, Kuo suggests the most premium iPhone 12, with the same position in its respective range as the iPhone 11 Pro Max, will offer a "completely wireless experience.". That means no 3.5mm headphone jack (many iPhones and Android phones have now dropped this), but also no Lighting Port for powering the phone up.

Instead, iPhone users will have to rely on wireless charging. Several generations of iPhones have been able to charge wirelessly, but it's tech that hasn't caught on for general users just yet. This also rules out using the port to connect to computers, or to use wired headphones via an adaptor: now, all your connection will be done through Bluetooth or the internet.

Kuo suggests this change is to "create more differentiation between the highest-end and high-end models", in an attempt to make the differences between the devices more obvious than in the iPhone 11 range. There's no word on if this will affect the iPhone 12 range, but that seems unlikely.

While a completely portless iPhone sounds alien, the device is set to come out in late 2021, and tech changes fast, so it's possible wireless charging, audio and connectivity will be commonplace then.

The iPhone SE 2 Plus mentioned too

Ming-Chi Kuo also references the iPhone SE 2 Plus. This is a different device to the anticipated iPhone SE 2 that we're expecting to see in 2020.

The iPhone SE 2 Plus will apparently come out in the first half of 2021, and Kuo states "the display size will be 5.5 or 6.1-inch", and also "the notch area will be smaller because of no Face ID support." Instead, "the ‌Touch ID‌ will be integrated with the power button, which is located on the side."

This makes the device sound like an older iPhone, retaining the physical buttons and rolling back some newer features, but likely with a newer chipset than the one that came with the original iPhone SE - which had the same chipset as the iPhone 6 or iPhone 7.

Not everyone is convinced the iPhone SE 2 will ever see the light of day, so talk of an iPhone SE 2 Plus might prove premature, but if it does exist we'd expect to hear more about it in the coming months, so stay tuned.