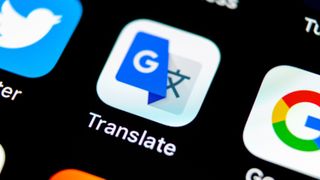 Google has begun rolling out a new dark mode for Google Translate for Android, and it's surprisingly bright.

The new option is starting to appear for Android 10 users who have upgraded to Google Translate version 6.4.0 and are using their phone's system-wide dark mode (which forces dark mode on supported apps).

When done well, dark mode can be a great addition to a mobile app, giving a handy extra option that reduces glare in gloomy conditions, saves you a little power when you use the app frequently, and generally makes a refreshing change.

Google Translate's dark mode is mostly gray rather than black (which means limited scope for power-saving, particularly for AMOLED screens where truly black pixels are switched off), and as Android Police notes, the chosen shade isn't actually particularly dark.

The app's blue elements are unchanged from the light version, which may also lead some AMOLED phone owners who rely on Google Translate to worry about burn-in, which happens when the screen degrades through use.

On an AMOLED panel, blue sub-pixels are the least durable (less so than red and green) so interfaces with lots of static white and blue elements on show are typically best avoided to avoid leaving an after-image.

Turn down the lights

If you want to try (and judge) it for yourself, you can either look for the latest update in the Google Play Store, or download and install the APK manually. However, the rollout seems to be very limited for the time being, so don't be disappointed if you can't see it yet.

It's also worth bearing in mind that this might only be a small test of an unfinished design, so it may change significantly before its full release. Fingers crossed.