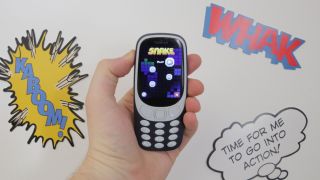 The re-release of the Nokia 3310, which didn't have Android on board (Image credit: Future)

Android is the most prolific operating system for mobile phones around the world and it may soon be making its way to a whole new area - feature phones.

According to an updated listing from the Wi-Fi Alliance - the company that certifies wireless internet products - an upcoming device is set to be called the Nokia 400 4G and it will include an operating system referred to as GAFP.

XDA Developers spotted the updated listing and pointed out how GAFP was previously mentioned in a leak about an Android-toting feature phone provided last year by 9To5Google.

Exactly how Android could work on a feature phone is currently unclear. A lot of developers have specifically made their apps for a touchscreen device whether that's an Android phone or tablet, so given that feature phones typically don't have a touchscreen it may only be specific applications that will be compatible with the device.

We may be set to hear about the Nokia 400 4G at Mobile World Congress this year. According to a leak we saw yesterday, HMD Global - the company that makes phones under the Nokia brand - will be introducing four new devices in the coming months.

That will likely include a new flagship as well as the Nokia 5.2 and Nokia 1.3, and what one website referred to as a device in the "Nokia Original Series".

It's not currently clear what the "Original Series" is, but it may mean a feature phone in a similar way to how HMD Global reintroduced the Nokia 3310 a few years ago. If that's the case, there's a very strong chance we could hear about it by the end of February, when MWC is set to take place.