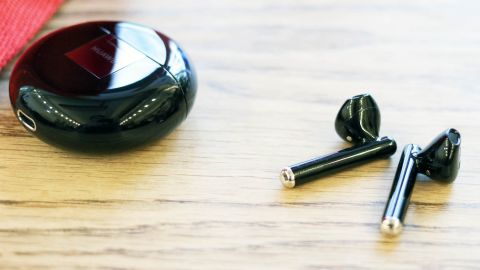 The Huawei FreeBuds 3 may look like AirPods, but they deliver a novel take on active noise cancelation that will appeal to those who want a wipe-clean pair, or anyone who isn't keen on jamming buds right into their ears. They also sound decent while blocking out a portion of background noise, so while Huawei's latest buds don't keep all ambient sound at bay, they are a solid set for a Android users especially.

Since the Huawei FreeBuds 3 were announced, complete with an AirPod-a-like look and feel, Apple has launched the AirPods Pro, its own take on noise-canceling buds. Interestingly, Huawei's latest true wireless earbuds are more faithful to Apple's original formula than the Pros, though.

The FreeBuds sport an open-ear fit; in other words, nothing jams right in your ear. Instead, they sit relatively superficially. In fact, the Freebuds are the first in the world to combine an open fit with active noise canceling (ANC), as the two features are somewhat contradictory.

So what's Huawei playing at? Out of the gate, its open-fit bud is on the back foot with no passive noise cancellation; and at £169 (about AU$320 based on current conversion rates), they're not exactly cheap. While they're not currently available in the US, that works out at around $220 – it's possible this could change in the future, though.

All true, but for anyone who actually likes how superficial the original AirPods are, and we do, the Freebud 3s could be an excellent fit.

These buds look very familiar; a polished plastic body meets a hard stem and a round puck at the top. Pick up the white pair and you'll be hard-pressed to tell them apart from AirPods unless you've got both sets of buds side by side.

If you're anything like us, you'll prefer the black FreeBud 3s, if only for the fact they look unique; and to be fair to Huawei, we enjoy handling them, they're easy on the eye, and feel solid.

The same can be said of the FreeBud 3's charging case. Shaped like a disc with a spring-loaded flap, it powers up when open, sports an LED to indicate battery percentage, and charges up via a USB-C port at the base – or wirelessly, if you prefer.

There's a button to the side of the charging case that activates pairing mode, and other than the fact the black version smudges up with fingerprints very readily, we've got no complaints with the fit and finish of either bud nor case.

What's more, the FreeBud 3's in-ear fit was fantastic for us, which is something we didn't expect. We've had mixed experiences with Huawei headphones in the past - specifically the FreeLaces, which didn't stay in some reviewers' ears for more than a couple of minutes. Impressively, by contrast, we managed to work out for a full hour with the FreeBuds without having to readjust them.

Considering the FreeBud 3s don't create a seal when in the ear, they sound impressive, producing a spacious soundstage that's significantly rounder than we anticipated.

The volume is decent, putting other open-fit options like the Google Pixel Buds to shame, and highs aren't too pitchy. The buds can struggle with getting low frequencies across, especially when outdoors in noisy environments. You can also get better immersion from more cost-effective buds like the Urbanista Athens; however, the usability of the FreeBuds is superior to most cheaper options, provided you're using them with an Android phone - more on that later.

If you're looking for buds that let in ambient noise, but still sound decent, these are top dogs for commutes and jogs. You'll be able to hear the station announcements and be aware of oncoming traffic, but still have a decent quality listening experience.

We would have loved an adjustable EQ through the app to give the FreeBuds extra versatility. Their default sound profile is very neutral, and while that's no bad thing, the option to tweak the bass could have given them an edge over competitors.

Additionally, when listening to spoken word content in particular, voices played back can sound a bit robotic, lacking in warmth and depth, in comparison to sealed buds like the AirPod Pros and over ears like Sony's WH-1000X M3.

Voice calls, meanwhile, are handled impressively across most environments, though if you're in an office or cafe with lots of background chatter, these buds can struggle with isolating your voice.

This is an interesting one - active noise canceling without any passive noise canceling. In other words, with no sound seal, ambient sound creeps through, but the FreeBud 3s still drown out constant background drones like engines or fans whirring – we found this utterly bizarre, at first.

While this might sound like a non-starter as a result, it really isn't. Firing up noise canceling takes the edge off annoying train drones and even helped us hear our music and audiobook more clearly when on a plane, dampening the engine noise significantly.

To activate it, you can either use the Android app or double-tap the left earbud. Within the app, however, is a fine-tuning dial, so you can refine the ANC to suit your environment and ear shape. Here, you can also reassign what a double-tap of the left or right buds do. None of these features are available for iOS, which makes the Huawei FreeBuds 3 an Android-only set of buds in our opinion.

You can use the buds with iOS devices, but first, you need to set the parameters for noise-canceling and left and right double-tap functionality in the Android app. We used our Android phone for set-up and installing updates, therefore, and only then paired them with our iPad.

The Android application finds the FreeBuds without any trouble, or you can pair traditionally using the Bluetooth menu. If you have a Huawei phone running EMUI 10, the buds have wearing detection too, and we didn't find sound syncing between the left and right buds to be an issue.

With 30mAh of battery per FreeBud and 410mAh in the charging case, the FreeBud 3s are both competitive and convenient, with the case packing more than four times the charge of the buds.

The buds last about four hours on a single charge, less if noise-canceling is fired up, and they charge in just 30 minutes, which is respectable.

What's also great about the case is that it charges wirelessly, just like that of the Samsung Galaxy Buds. It also powers up in around an hour; one hour for 20+ hours of music? Not bad going.

If you like the idea of earbuds you can wipe down and share with friends or family, decent quality sound, and a bit of ambient noise creeping in to keep you safe on the streets or alert on a train, then the FreeBuds 3s are for you, provided you've got an Android smartphone.

They're a unique product that won't out-perform in-ear options, but with their secure fit and novel take on active noise cancelation, not to mention decent battery life, set themselves apart nicely.

At £169, they aren't cheap – pricier than 2019 AirPods ; that said, they cost less than other noise-canceling buds from Apple or Sony, and offer something truly unique, particularly for Android users.