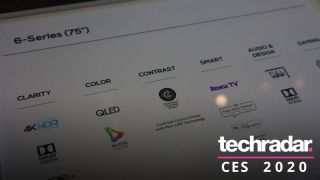 TCL kicked off CES 2020 by announcing an update to its 8-Series screens with new-and-improved Mini-LED technology. But what TCL didn’t mention is that Mini-LED technology is coming to its well-loved and ultra-popular 6-Series as well.

We caught a glimpse of the new screens at TCL’s CES 2020 booth where the new 6-Series TVs could be found, hidden in plain sight.

While past iterations of the 6-Series have offered Full-Array backlights and, most recently Quantum Dots to enhance color saturation, the inclusion of Mini-LED would massively boost black levels and overall contrast by increasing the number of contrast control zones to well over 1,000.

Unlike OLED that tops out around 700 nits of peak brightness, these new Mini-LED TVs would offer a peak brightness of above 1,000 nits - making them an even better option for watching HDR content and better suited for daytime viewing than an OLED TV.

While no one at TCL’s booth could tell us the final price for the upcoming 6-Series, multiple employees cited how important the price of the range is to the company, and even pointed to a downward trend in pricing for the 6-Series in the last few years.

That's far from a promise, but if the new 6-Series is cheaper than its predecessors and featured Mini-LED technology that would be pretty impressive, especially considering how expensive the few Mini-LED TVs on the market (TCL’s own 8-Series included) have been. (For reference, last year’s 8-Series launched at $1,999 for the 65-inch version and extended up to $2,999 for the 75-inch version.)

If TCL can keep costs lower than LG’s OLED and offer similar performance, the new 6-Series could be the best mid-range TV to buy in 2020.

On top of a Mini-LED-powered 6-Series, we also saw a new 5-Series QLED TV on the show floor, too. Last year the 5-Series was upgraded to support Dolby Vision but this year's upgrade to QLED will make it much more colorful and vibrant.

We'll try to get time with TCL's entire lineup this week at the show, but for now, these TVs could put some serious pressure on Samsung, Sony and LG.