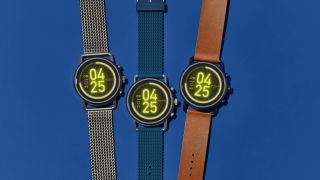 The Falster 3 uses a faster Snapdragon Wear 3100 chipset and has double the RAM of its predecessor at 1GB. It also has a number of battery modes, including a new ‘Extended Battery Mode’, which promises multiple days of life on a single charge, and should help address our battery life concerns from the Falster 2.

Other upgrades in this new model include double the storage at 8GB, and a speaker, which thanks to a proprietary app allows both Android and iPhone users to make tethered calls.

There’s also GPS, NFC, an upgraded heart rate monitor, a microphone, water resistance to 30 meters, and the promise of fast charging, with the Skagen Falster 3 apparently able to get 80% of its life back in 50 minutes.

As for the design, the Falster 3 has a 1.3-inch circular AMOLED screen with 328 pixels per inch, and a 42mm stainless steel case that’s 11mm thick. You can also optionally get it with a silicone-mesh strap, which is something offered by no other smartwatch range.

A Gen 5 in disguise

In truth, aside from the design and some of its digital watch dials (including an exclusive one from X by KYGO), the Skagen Falster 3 sounds a lot like the Fossil Gen 5.

But that’s no accident, since Fossil is behind it, and is using the same core tech in most of its recent smartwatches. But that’s no bad thing, as it should still be a big upgrade on the Falster 2.

If you want to get your hands on the Skagen Falster 3 you’ll be able to do so from today (January 7), at a cost of $295 in the US. In the UK it will be landing a little later for £279. Australian pricing hasn't been confirmed at the time of writing, but with its US and UK price being the same as the Fossil Gen 5's, its price elsewhere likely will be too, meaning AU$499.