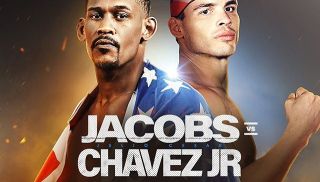 Daniel Jacobs is back on the comeback trail and making his super middleweight debut tonight against Mexican old stager Julio Cesar Chavez Jr. Read on to find out how to get a Jacobs vs Chavez Jr live stream, no matter where on Earth you are.

The pair share a common sore point, having both recently been defeated at middleweight level by the indestructible Canelo Álvarez, with Jacobs' loss to the red-haired warrior coming in his last fight - a bitter points defeat back in May which saw him relinquish his IBF middleweight title.

Jacobs vs Chavez Jr - where and when

Ring walks for the main event are expected at around 9pm MST local time, so that's a 11pm ET / 8pm PT start across the States and a predicted 4am GMT start for fight fans in the UK.

But Jacobs's record still stands at an impressive 35 wins and three defeats and he’ll be looking to get things back on track against another Mexican. While Jacobs last five fights have gone to a decision, the American can still boast a formidable career knockout percentage of 83% and is widely expected to fare well moving up to 168 lbs in the super middleweight division.

The son of retired six-time world boxing champion Julio César Chávez and older brother of Omar Chávez, Chavez Jr is part of Mexican boxing royalty, but his defeat to Canelo back in 2017 may have been even more damaging than Jacobs', with the 33-year-old having only fought once since that loss.

Despite his potential rustiness, in part thanks to his evasion of VADA drug tests which saw him serve a suspension, it shouldn't be discounted that Chavez Jr was once a dominant force as a middleweight champion, clocking up 46 wins before his damaging Canelo defeat.

Who will get their career back on track at the Super Middleweight category? Read on to find out how to live stream the Jacobs vs Chavez Jr fight from absolutely anywhere - although if you're in the US or Canada, we can save you the time by confirming that DAZN has all the coverage.

In the US, UK or Canada tonight? Then scroll just a little further down this page and we'll tell you who's broadcasting the boxing from where you are.

They're are also really handy if you're concerned about streaming safely on the web, thanks to the encryption they use to hide your details. And the best won't log your personal information, either. We've tested hundreds of VPNs and can recommend ExpressVPN as the best VPN service currently available.

ExpressVPN (comes with a 30 day money back guarantee) and is our #1 rated best VPN in the world right now thanks to its speed, security, ease-of-use and high-calibre customer service. You can watch on many devices at once including Smart TVs, Fire TV Stick, PC, Mac, iPhone, Android phone, iPads, tablets etc.

Check out ExpressVPN now and get 3 months FREE with an annual plan.

How to watch Jacobs vs Chavez Jr: US live stream

Streaming service DAZN has added yet another event to its ever growing roster with the Jacobs vs Chavez Jr fight. This main fight should start at 11pm ET / 8pm PT.

DAZN is the channel holding the cards for Jacobs vs Chavez Jr in Canada, too. But unlike South of the border, Canadians are also offered the one month free trial. Subscriptions are $20 per month or $150 annually at present.

How to watch the Jacobs vs Chavez Jr fight: UK stream

If you're a Sky Sports customer, you can watch all the action from the States with coverage beginning on Sky Sport Main Event at 2am in the early hours of Saturday morning.

If you're not a Sky subscriber, you can watch the fight by purchasing a one-off Sky Sports pass with NOW TV, costing £.99 per day, While its special offer currently has a whole month for just £20.