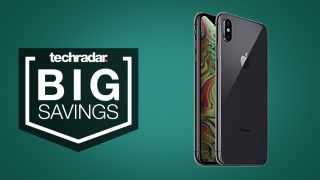 When we say 'slightly older' we mean it, because these devices aren't archaic by any means, and they're all impressive phones. Now, fantastic iPhone deals have slashed hundreds off the prices of some of the devices.

We've also picked out a couple of decent iPhone 8 deals over in the US to provide some lovely balance - do check them out if that's more your style.

These might be some of the best iPhone deals we see over Black Friday, so if you were waiting to buy an older phone in the sales season, we'd recommend going straight ahead and doing so now.

Sooner going for something even newer? Our EXCLUSIVE iPhone 11 contract deal gets you Apple's latest and greatest smartphone for only £33 per month (and £50 upfront) with a massive 60GB of data. Click the link for all the details.

iPhone 8 256GB: at Amazon | SIM-free | £566
This is the finally iPhone to use Apple's older design, but it's still a great device for people that don't need the most cutting-edge tech. Its price is now much lower than when the phone came out, so it's a great choice for anyone looking for a new iPhone without breaking the bank and it has oodles of storage.
View Deal

iPhone XS 256GB: at Amazon | SIM-free | £849
Last year's iPhone is a whopping £300 off, saving you a huge amount of cash on a phone that's still one of the best around. This is a great deal, and the price of the phone is now decidedly less than it was upon launch. We'd expect this deal to go fast though, so grab it while you can!
View Deal

iPhone XS Max 512GB: at Amazon | SIM-free | £1,151
You can save almost £300 on the biggest storage variant of the largest 2018 iPhone with this impressive deal. While this isn't the cheapest we've seen the phone, it's never dipped into triple figures, and it may be a few years before it actually does so.View Deal

What about in the US?

iPhone 8, 64GB (renewed) $ $339 on Amazon
This isn't the biggest Black Friday deal, but getting an affordable iPhone 8 even cheaper is still ideal. This is a renewed phone - in other words, pre-owned - but still certified to work like new. View Deal

iPhone 8, 64GB (Simple Mobile pre-paid): $349 at Walmart
If you're looking for a cheap deal on the iPhone 8, you're not going to get better than this from Walmart during this Black Friday deals period. It's available on Simple Mobile, so you'll need to choose one of the range of 30-day rolling contracts alongside.
View Deal

Not in the UK? These are the best prices we can find on these three fantastic iPhones in the US;

Sooner going for something newer? Our EXCLUSIVE iPhone 11 contract deal gets you Apple's latest and greatest smartphone for