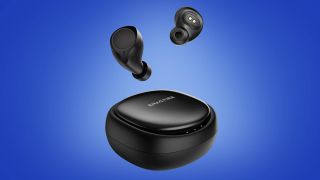 Amazon's Black Friday sales are a great time to pick up a pair of true wireless earbuds at a discount, from established brands like Sony, Apple, and Bose, as well as budget brands that you may not have come across before.

One of these brands is Enacfire; the Enacfire Future Wireless Headphones are proving very popular in Amazon's Black Friday sales, and are currently reduced from $49.99 to $33.99.

If you haven't heard of Enacfire before, we wouldn't blame you. The Chinese company doesn't reveal much information on its Amazon page, but a quick glance at its website tells us that it specializes in true wireless earbuds and micro-USB charging cables.

While Amazon reviews are largely positive, it can be hard to know whether to buy budget headphones from a smaller brand – here are our initial impressions.

The bottom line: Without testing them ourselves, it's difficult to recommend the Enacfire Future Wireless Headphones, and we'd probably recommend spending a little more on the Lypertek Tevi, which are our favorite budget true wireless earbuds right now.

If you're dead set on saving your hard-earned cash (and we don't blame you), you could try the Enacfire Future Wireless Headphones. Spec-wise they look okay, and an IPX5 rating means they could work as running headphones – just don't expect audiophile-quality sound.

Pros: The most obvious benefit of buying these buds is the price; they normally cost $49.99, but an Amazon Black Friday Lightning Deal means they're down to $33.99, which is significantly cheaper than most true wireless buds out there. They're also IPX5-rated, which is great if you need buds for working out. The stated battery life is also very good at 18 hours (although we're not sure whether to believe that one)

Cons: The biggest drawback with the Enacfire Future Wireless Headphones, is that the brand is largely unknown; there's no long audio heritage to place your trust in, so it's hard to know what you're getting. They also look pretty cheap based on Enacfire's marketing images, and we can't speak to the sound quality on offer here.

Enacfire Future Wireless Headphones: everything you need to know

The Enacfire Future Wireless Headphones are true wireless earbuds, and that means they have no cord whatsoever – nothing to get tangled in your pocket, but nothing to keep your two earbuds together either.

Cheap true wireless earbuds used to have a bad reputation, but it's possible to find some fantastic gems in the sub-$100 price range, like the Lypertek Tevi.

However, the Enacfire Future Wireless Headphones are much cheaper than this – and while that doesn't necessarily mean they aren't good, it does raise questions about their quality.

As we haven't tested these headphones first-hand, we'll have to rely on the specs to see what kind of audio quality, battery life, and wireless connectivity is on offer here.

Design: In terms of design, the Enacfire Future Wireless Headphones look quite similar to the Audio-Technica ATH-CKS5TW, with silicone eartips that the brand says will "fit perfectly in your ear". You get small, medium, and large eartips, so you should be able to find a good fit, which is important for both comfort and noise isolation, stopping your music from bugging the people around you (and vice versa).

Like all true wireless earbuds, they come with a charging case, which sports a subtle all-black design with the Enacfire logo displayed on the lid.

Enacfire says that these buds have an IPX5 waterproof rating, which should make them suitable for use while working out; they should withstand a little sweat or a drop of rain, but don't take them in the shower with you post-run.

Overall, they look quite cheap, so don't expect the luxe finish you'd get from Sony and other heritage audio brands.

Battery life: According to Enacfire, battery life comes in at 18 hours – it's not exactly clear whether this charge is held within the buds themselves or includes the additional battery life held by the charging case, too.

We'd be surprised if the buds themselves held a full 18 hours of playback; the Lypertek Tevi last for 10 hours per charge, and that's a remarkable number for a pair of true wireless earbuds.

Connectivity: Enacfire says that their true wireless earbuds have a Bluetooth range of 33-66 feet; 33 feet is around the standard for Bluetooth devices, so any more than that is a bonus.

An auto-pair feature means that, once you've paired them with your phone once, they should connect with your device automatically when you open the charging case.

Sound: Without testing them ourselves, we can't say whether the Enacfire Wireless Headphones sound good ourselves, but we can look to our sister site, Tom's Guide for guidance.

Having tested the Enacfire E18 True Wireless Bluetooth Earbuds, they said that "mids and highs are bright, whereas lows are a mixed bag depending on the music genre".

They're not exactly the same model, but Enacfire says they both boast "Hi-Fi stereo sound quality" and "deep bass" – so, they probably sound fairly similar.

Otherwise, there's no information about the kind of drivers these buds use, their frequency range, impedance, or sensitivity. So, making an assessment of the sound is a bit like stabbing in the dark – but at this price, you're probably not going to get the audiophile sound quality that a more expensive pair of earphones would offer.

Anything else? Buying from an unknown brand is always a bit of a risk – Enacfire certainly don't have the long heritage that the likes of Sony, Bose, and Audio-Technica enjoy.

That being said, the Enacfire Wireless Headphones are incredibly cheap, and even more-so than usual in Amazon's Black Friday sales. If you don't mind spending a little extra, we'd recommend trying the Lypertek Tevi; they're an absolute steal at £99 (about $130 / AU$185).

However, if you're willing to take the risk, the Enacfire Wireless Headphones could make a good pair of backup headphones for working out, or just having in your bag for emergencies.