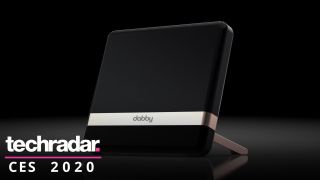 Streaming device Dabby has debuted at CES 2020, having previously hit its Kickstarter target back in 2019. This device aims to break down the barriers between streaming services, letting you search for any video content as long as it's legal and online, without the use of apps. You'll need to be subscribed to any services you wish to access, and Dabby will always find the best quality video source it can.

It's a combination tablet and dongle, and you can buy additional dongles if you want to control more of the TVs in your home. Dabby is either touch or voice-controlled, and uses an advanced AI to search for content. It's designed to replace existing streaming gadgets, and simplify the streaming experience from app and device switching, if that's a particular bugbear of yours.

You can even search for specific scenes in the content you're interested in. The example shown on Dabby's website says, 'Hey Dabby, play the clip from Avengers where Thanos snaps his fingers'. We'd have to get hands-on to know how comprehensive this feature is, but it sounds impressive. Dabkick previously told Slash Gear that its system indexes thousands of video sources, which includes user-generated content like Twitch streams as well as streaming services like Netflix.

Creator Dabkick says subscriptions are managed through its 'Dynamic Credentials AI'. If you walk out of a room with the Dabby tablet, you can seamlessly continue watching on your second screen, as its proximity sensors can detect your movements.

You can also watch a show or movie with someone else in another location with a video call to simulate a co-viewing experience, although presumably that requires ownership of another Dabby tablet. The device itself has a three-hour battery life for constant viewing, or eight hours when on standby, according to the manufacturer.

The price is steep for these cool features, though: Dabby has a list price of $399 on the official website, which is on the high end for a TV streaming device, and a little higher than the planned retail price of $249-$299 currently mentioned on the device's Indiegogo page. During CES, though, it's discounted by $50 if you're interested. It's expected to start shipping in April. When we've sampled a finished unit, we'll tell you what we think.